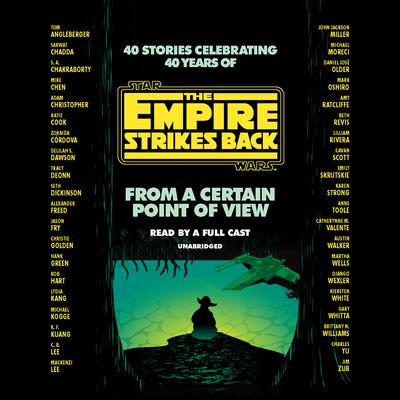 From a Certain Point of View: The Empire Strikes Back (Star Wars)

Star Wars: From a Certain Point of View: Book 2

Hank Green is the author of the #1 New York Times bestseller An Absolutely Remarkable Thing. He is the CEO of Complexly, a production company that creates educational content, including Crash Course and SciShow, prompting the Washington Post to name him “one of America’s most popular science teachers.” Complexly’s videos have been viewed more than two billion times on YouTube. He also cofounded a number of other small enterprises, including DFTBA.com and the Project for Awesome, which last year raised more than two million dollars for charities, including Save the Children and Partners in Health.

R. F. Kuang is the author of the Poppy War fantasy fiction series and was a finalist for the Astrounding Award for Best New Writer. She immigrated to the United States from Guangzhou, China, in 2000 and studies Asian history at Georgetown University. She graduated from Odyssey Writing Workshop in 2016.

Seth Dickinson’s short fiction has appeared in Analog, Asimov’s, Clarkesworld, Lightspeed, Strange Horizons, Beneath Ceaseless Skies, among others. He is an instructor at the Alpha Workshop for Young Writers, winner of the 2011 Dell Magazines Award, and a lapsed student of social neuroscience. He lives in Brooklyn, New York. The Traitor Baru Cormorant is his first novel.

Kiersten White is the New York Times bestselling author of the Paranormalcy trilogy, The Chaos of Stars, and the psychological thriller Mind Games. Although originally meant to be the story of a femme fatale, Mind Games and Perfect Lies quickly turned into the story of two sisters and impossible choices. This may be because Kiersten has three sisters, none of whom she has killed for, but all of whom she has considered killing at one point or another. Kiersten lives in San Diego with her family.