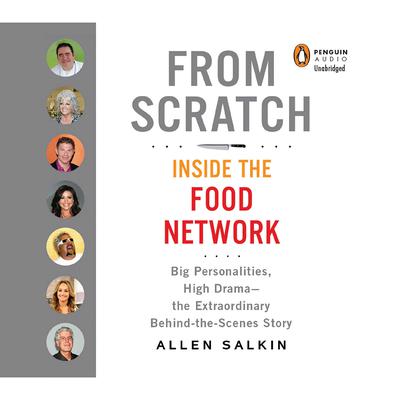 From Scratch: The Uncensored History of the Food Network

Big personalities, high drama the extraordinary behind-the-scenes story of the Food Network, now about to celebrate its twentieth anniversary: the business, media, and cultural juggernaut that changed the way America thinks about food. In October 1993, a tiny start-up called the Food Network debuted to little notice. Twenty years later, it is in 100 million homes, approaches a billion dollars a year in revenue, and features a galaxy of stars whose faces and names are as familiar to us as our own family's. But what we don't know about them, and the people behind them, could fill a book. Based upon extensive inside access, documents, and interviews with hundreds of executives, stars, and employees all up and down the ladder, Allen Salkin's book is an exhilarating roller-coaster ride from chaos to conquest (and sometimes back). As Salkin takes us inside the conference rooms, studios, homes, restaurants, and after-hours meetings, we see a salty Julia Child lording it over the early network performers; a fragile Emeril Lagasse staggering from the sudden public shock of cancellation; a very green Rachael Ray nearly burning down the set on her first day; a torn Tyler Florence accepting the Applebee's job he knows he can't refuse, but with a chill running down his spine; a determined Bobby Flay reinventing himself once again to survive. Paula Deen, Tom Colicchio, Anthony Bourdain, Mario Batali, Jamie Oliver, Martha Stewart, Guy Fieri, Cat Cora: Salkin illuminates the people we thought we knew, and the ones we never knew about, in this irresistible story of the intersection between business, television, pop culture, food and us.

Allen Salkin has been a journalist for such publications as New York magazine, the Village Voice, and Details. As a reporter for the New York Times, he wrote hundreds of features about food, culture, and media. He lives in New York City.