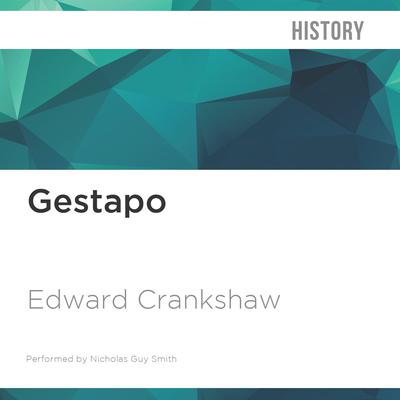 The Grim story of the most vicious Terror Agency of all time—its sinister power and barbaric acts, and the twisted men who led it—Hitler, Himmler, and Eichmann. This is the brutal expose of the rotten core of Nazi Germany. Here is revealed the true story of Hitler's terror police, the in-famous Gestapo-the madmen who headed it, the sadists who staffed it, the degenerate party that spawned it.

Edward Crankshaw (1909—1984) was a British writer, translator and commentator on Soviet affairs. Born in London, Crankshaw was educated in the Nonconformist public school, Bishop's Stortford College in Hertfordshire. He started working as a journalist for a few months at The Times. In the 1930s he lived in Vienna, Austria, teaching English and learning German (his competent grasp of German caused him to become part of the British Intelligence service during World War II). On his return he went back to write for The Times and began to write reviews-mostly musical-for The Spectator, The Bookman, and other periodicals. Crankshaw wrote around 40 books on Austrian and Russian subjects and after the war began his research in much more depth. Crankshaw's book on Nazi terror, Gestapo (1956), was widely read and in 1963 he began to produce the ambitious literary works, often on historical or monumental moments in Russian Political history.