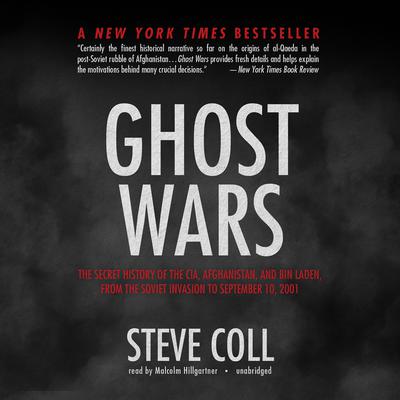 Ghost Wars: The Secret History of the CIA, Afghanistan, and bin Laden, from the Soviet Invasion to September 10, 2001

Winner of the 2005 Pulitzer Prize for General Nonfiction

Winner of the 2004 Cornelius Ryan Award

The explosive firsthand account of America's secret history in Afghanistan

To what extent did America's best intelligence analysts grasp the rising threat of Islamist radicalism? Who tried to stop bin Laden and why did they fail? Comprehensively and for the first time, this Pulitzer Prize–winning work by journalist Steve Coll recounts the history of the covert wars in Afghanistan that fueled Islamic militancy and sowed the seeds of the September 11 attacks. Based on scrupulous research and firsthand accounts by key government, intelligence, and military personnel both foreign and American, Ghost Wars details the secret history of the CIA's role in Afghanistan, the rise of the Taliban, the emergence of bin Laden, and the efforts by US forces to find and assassinate bin Laden in Afghanistan.

“Certainly the finest historical narrative so far on the origins of al-Qaeda in the post-Soviet rubble of Afghanistan…Ghost Wars provides fresh details and helps explain the motivations behind many crucial decisions.” —New York Times Book Review
“A well-written, authoritative, high-altitude drama with a cast of few heroes, many villains, bags of cash, and a tragic ending—one that may not have been inevitable.” —Washington Post
“Mr. Coll’s book is well documented…Indeed, of the more than one hundred published books dealing with the September 11th attacks…none approach Mr. Coll’s work for clarity and insight into the agency itself…Truly a page-turner…an important work.” —New York Sun
“Gripping new history of the events leading up to September 11, 2011…Coll never simplifies a complex situation.” —Seattle Times
“Terrifying and substantive…Coll offers a surprisingly cohesive narrative of the makings of September 11, 2011.” —Salon
“No one else I know of has been able to bring such a broad perspective to bear on the rise of bin Laden; the CIA itself would be hard put to beat his grasp of global events…Coll’s book is deeply satisfying because…it’s an inside account written by an outsider, the most objective history I have read of the many failures of the CIA and the US government in the region.” —New York Review of Books
“Coll’s research is extensive; his access to senior officials of all the principal countries involved in Afghanistan is nothing short of astounding…With this book, Coll establishes a reputation as large as that of his Post colleague, Bob Woodward.” —Globe and Mail (Toronto)
“Steve Coll has distilled the essence of what led to the September 11, 2011 terrorist attacks…Highly readable…Beyond that, he did it while holding one of the most demanding jobs in American journalism. That anyone could write a book while holding such a job is quite an accomplishment, writing such a compelling narrative about terrorism and the failures of American intelligence is a triumph.” —Associated Press
“Goes a long way toward explaining the systemic errors that caused the United States, through five administrations, to fail its most important foreign policy challenge since World War II…A powerful book, impeccably reported, containing hundreds of interviews with the principals in the US intelligence and national security establishments.” —Newsday

Steve Coll is the New York Times bestselling author of the Pulitzer Prize-winning Ghost Wars and the dean of the Graduate School of Journalism at Columbia University. From 2007 to 2013 he was president of the New America Foundation, a public policy institute in Washington, DC. He is a staff writer for the New Yorker and previously worked for twenty years at the Washington Post, where he received a Pulitzer Prize for explanatory journalism in 1990. He is the author of seven other books, including On the Grand Trunk Road, The Bin Ladens, and Private Empire.