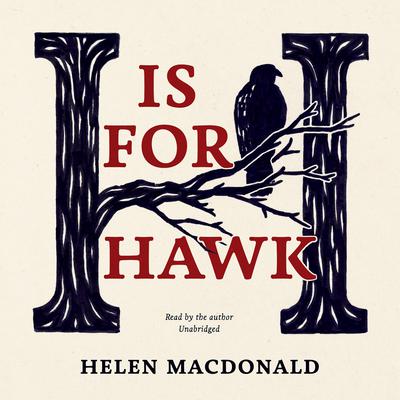 H Is for Hawk

Winner of the 2014 Costa Book Award for Biography

Winner of the 2014 Samuel Johnson Prize for Nonfiction

A Wired Magazine Pick of Best Nonfiction of the Decade

One of Audible’s Best Audiobooks of 2015 for Bios & Memoirs

An AudioFile Best Voice of 2015

A BookPage Top Pick of Audiobooks for June 2015

Shortlisted for the 2016 Carnegie Medal for Literature

Shortlisted for the 2015 Kirkus Prize for Nonfiction

Finalist for the 2016 Indies Choice Award for Adult Nonfiction

A NPR’s Great Reads Selection of 2015

A Flavorwire Pick for Best Nonfiction of 2015

A Men’s Journal Pick for Gifts for Your Mothers

A BuzzFeed Books Pick for Best Nonfiction of 2015

A Paste Magazine Pick for 30 Best Nonfiction Books of 2015

A Federalist Notable Book of 2015

A Portland Mercury Pick for Required Reading of 2015

A Gizmodo Pick for Most Loved Science Books of 2015

A Library Journal Best Book of 2015

One of Granta’s Best Books of the Year

A BookRiot Pick for Books about Nature and Wildness

An Electric Literature Pick of 11 Books about Outsiders

A BookRiot Pick of Soothing Audiobooks to Fall Asleep To

When Helen Macdonald's father died suddenly on a London street, she was devastated. An experienced falconer captivated by hawks since childhood, she'd never before been tempted to train one of the most vicious predators: the goshawk. But in her grief, she saw that the goshawk's fierce and feral anger mirrored her own. Resolving to purchase and raise the deadly creature as a means to cope with her loss, she adopted Mabel and turned to the guidance of The Once and Future King author T. H. White's chronicle The Goshawk to begin her journey into Mabel's world. Projecting herself "in the hawk's wild mind to tame her" tested the limits of Macdonald's humanity.

By turns heartbreaking and hilarious, this book is an unflinching account of bereavement, a unique look at the magnetism of an extraordinary beast, and the story of an eccentric falconer and legendary writer. Weaving together obsession, madness, memory, myth, and history, H Is for Hawk is a distinctive, surprising blend of nature writing and memoir from a very gifted writer.

“It sings. I couldn’t stop reading.” —Mark Haddon, New York Times bestselling author
“Captivating and beautifully written, it’s a meditation on the bond between beasts and humans and the pain and beauty of being alive.” —People
“One of the loveliest things you’ll read this year.” —Entertainment Weekly
“Macdonald’s first sight of her bird…is one of the most memorable passages I’ve read this year or, for that matter, this decade. The heat of the moment is enough to melt grammar.” —Time
“Macdonald’s beautiful and nearly feral book…is so good that, at times, it hurt me to read it. It draws blood, in ways that seem curative.” —New York Times
“Helen Macdonald has written a spectacular memoir…She is also a marvelous narrator, evoking the open spaces of her Cambridge fields, the natural violence of a goshawk’s existence, and her crippling fear of mingling with society when she is so bereft. It is all there in her voice, along with a crisp English accent that is such a pleasure to listen to…She slightly lowers her voice to distinguish White’s story from her own journey out of sorrowful madness into a hopeful future. Winner of the AudioFile Earphones Award.” —AudioFile
“A well-wrought book, one part memoir, one part gorgeous evocation of the natural world, and one part literary meditation…The discovery of the season.” —Economist (London)
“A talon-sharp memoir that will thrill and chill you to the bone…Macdonald has just the right blend of the scientist and the poet, of observing on the one hand and feeling on the other.” —Daily Mail (London)
“What [Macdonald] has achieved is a very rare thing in literature—a completely realistic account of a human relationship with animal consciousness…It is a soaring performance, and Mabel is the star.” —Sunday Times (London)
“A dazzling piece of work: deeply affecting, utterly fascinating, and blazing with love and intelligence…a deeply human work shot through, like cloth of gold, with intelligence and compassion.” —Financial Times (London)
“Extends the boundaries of nature writing. As a naturalist she has somehow acquired her bird’s laser-like visual acuity. As a writer she combines a lexicographer’s pleasure in words as carefully curated objects with an inventive passion for new words or for ways of releasing fresh effects from the old stock.” —Guardian (London)
“In this profoundly inquiring and wholly enrapturing memoir, Macdonald exquisitely and unforgettably entwines misery and astonishment, elegy and natural history, human and hawk.” —Booklist (starred review)
“Poignant, thoughtful, and moving—and likely to become a classic.” —Kirkus Reviews (starred review)
“Unexpectedly, Macdonald is an extraordinary, nuanced narrator, whose elegant voice makes her eloquent prose even more affective.” —BookPage (audio review)
“Macdonald reads her own work in an emotionally resonant voice slightly reminiscent of Emma Thompson’s. For readers who have difficulty tracking Macdonald through her multipronged memoir, her narration might be just the ticket.” —Library Journal (audio review)
“[An] elegant synthesis of memoir and literary sleuthing.” —Publishers Weekly
“A deep, dark work of terrible beauty that will open fissures in the stoniest heart…Macdonald is a survivor…she has produced one of the most eloquent accounts of bereavement you could hope to read…A grief memoir with wings.” —Bookseller
“This beautiful book is at once heartfelt and clever in the way it mixes elegy with celebration: elegy for a father lost, celebration of a hawk found—and in the finding also a celebration of countryside, forbears of one kind and another, life-in-death. At a time of very distinguished writing about the relationship between human kind and the environment, it is immediately preeminent.” —Andrew Motion, author of In the Blood
“A book made from the heart that goes to the heart…It combines old and new nature and human nature with great originality. No one who has looked up to see a bird of prey cross the sky could read it and not have their life shifted.” —Tim Dee, author of The Running Sky
“A lovely touching book about a young woman grieving over the death of her father becoming rejuvenated by training one of the roughest, most difficult creatures in the heavens, the goshawk.” —Jim Harrison, American author
“The most magical book I have ever read.” —Olivia Laing, author of The Trip to Echo Spring
“A work of great spirit and wonder, illuminated equally by terror and desire. Each beautiful sentence is capable of taking a reader’s breath. The book is built of feather and bone, intelligence and blood, and a vulnerability so profound as to conjure that vulnerability’s shadow, which is the great power of honesty. It is not just a definitive work on falconry; it is a definitive work on humanity and all that can and cannot be possessed.” —Rick Bass, American writer and environmental activist
“One of the year’s most acclaimed books, Helen MacDonald’s H Is for Hawk brings together a meditation on grief with observations on the natural world around us.” —Vol1Brooklyn.com

Helen Macdonald is a writer, poet, illustrator, historian, and naturalist, as well as an affiliated research scholar at the Department of History and Philosophy of Science at the University of Cambridge, where she teaches undergraduate and graduate courses. She also worked as a research fellow at Jesus College, Cambridge. As a professional falconer, she assisted with the management of raptor research and conservation projects across Eurasia.