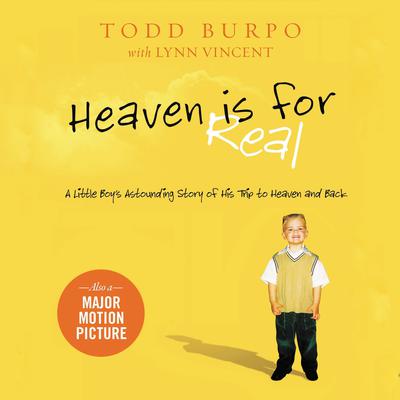 Heaven is for Real: A Little Boy's Astounding Story of His Trip to Heaven and Back

By Todd Burpo  and  Lynn Vincent
Read by Stu Gray

“A beautifully written glimpse into heaven that will encourage those who doubt and thrill those who believe.” —Ron Hall, coauthor of Same Kind of Different as Me

“Do you remember the hospital, Colton?” Sonja said. “Yes, mommy, I remember,” he said. “That’s where the angels sang to me.”

When Colton Burpo made it through an emergency appendectomy, his family was overjoyed at his miraculous survival. What they weren’t expecting, though, was the story that emerged in the months that followed—a story as beautiful as it was extraordinary, detailing their little boy’s trip to heaven and back.

Colton, not yet four years old, told his parents he left his body during the surgery–and authenticated that claim by describing exactly what his parents were doing in another part of the hospital while he was being operated on. He talked of visiting heaven and relayed stories told to him by people he met there whom he had never met in life, sharing events that happened even before he was born. He also astonished his parents with descriptions and obscure details about heaven that matched the Bible exactly, though he had not yet learned to read.

With disarming innocence and the plainspoken boldness of a child, Colton tells of meeting long-departed family members. He describes Jesus, the angels, how “really, really big” God is, and how much God loves us. Retold by his father, but using Colton’s uniquely simple words, Heaven Is for Real offers a glimpse of the world that awaits us, where as Colton says, “Nobody is old and nobody wears glasses.”

Heaven Is for Real will forever change the way you think of eternity, offering the chance to see, and believe, like a child.

Todd Burpo, pastor of Crossroads Wesleyan Church in Imperial, Nebraska, is the author of Heaven Is for Real, Heaven Is for Real for Kids, and Heaven Is for Real for Little Ones. He is also the co-author, along with his wife Sonja, of Heaven Changes Everything. He can be found working shoulder-to-shoulder with the Imperial Volunteer Fire Department as a firefighter. He is also the chaplain for the Nebraska State Volunteer Firefighter’s Association. He has operated an overhead door company, coached wrestling, and served on the local school board. He was ordained in 1994.

Lynn Vincent, a US Navy veteran, is a New York Times bestselling author and coauthor of eleven nonfiction books with more than sixteen million copies in print. A veteran journalist and author of more than 1,000 articles, her investigative pieces have been cited before Congress and the US Supreme Court.