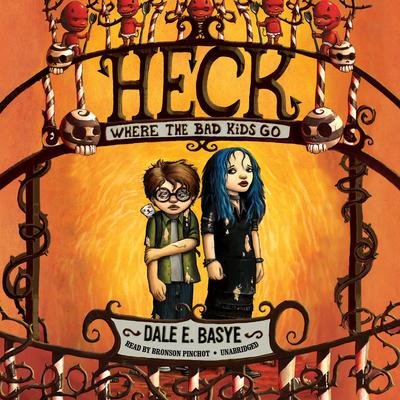 Heck: Where the Bad Kids Go

The Circles of Heck Series: Book 1

When Milton and Marlo Fauster die in a marshmallow-bear explosion, they get sent straight to Heck, an otherworldly reform school. Milton can understand why his kleptomaniac sister is here, but Milton is—or was—a model citizen. Has a mistake been made? Not according to Bea “Elsa” Bubb, the Principal of Darkness. She doesn’t make mistakes. She personally sees to it that Heck—whether it be home-ec class with Lizzie Borden, ethics with Richard Nixon, or gym with Blackbeard the pirate—is especially, well, heckish for the Fausters. Will Milton and Marlo find a way to escape? Or are they stuck here for all eternity, or until they turn eighteen, whichever comes first?

Dale E. Basye has written stories, essays, and reviews for many publications and organizations. He was a film critic, winning several national journalism awards, and the publisher of an arts and entertainment newspaper called Tonic. He lives with his wife and son in Portland, Oregon.