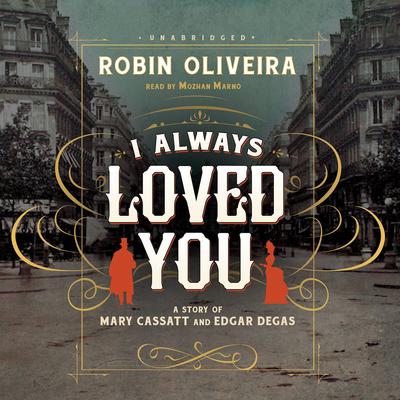 I Always Loved You: A Story of Mary Cassatt and Edgar Degas

The young Mary Cassatt never thought moving to Paris after the Civil War to be an artist was going to be easy, but when, after a decade of work, her submission to the Paris Salon is rejected, Mary's fierce determination wavers. Her father is begging her to return to Philadelphia to find a husband before it is too late, her sister Lydia is falling mysteriously ill, and worse, Mary is beginning to doubt herself. Then one evening a friend introduces her to Edgar Degas and her life changes forever. Years later she will learn that he had begged for the introduction, but in that moment their meeting seems a miracle. So begins the defining period of her life and the most tempestuous of relationships.

In I Always Loved You Robin Oliveira brilliantly re-creates the irresistible world of belle epoque Paris, writing with grace and uncommon insight into the passion and foibles of the human heart.

“Oliveira follows her bestselling historical fiction debut, My Name Is Mary Sutter, with a novel based on the life of the ‘formidable’ American painter Mary Cassatt…A historically and aesthetically rich, complexly involving, and forthrightly sorrowful novel of the perilous, exhilarating, and world-changing lives of visionary artists breaking new ground and each other’s hearts.” —Booklist (starred review)
“American painter Mary Cassatt has just moved to the City of Light, not to fall in love, but to pursue her dream of becoming an artist…A chance meeting with Edgar Degas, one of the leading impressionist-era rebels, changes the course of her career and life. Though it’s never been proven that the two painters were lovers, Oliveira explores the next forty turbulent years of their relationship, and what might have been, crafting a tale of inspiration, desire, and restraint between two great artists of the nineteenth century.” —Publishers Weekly
“Oliveira’s new novel purports to be about the decade-long, convoluted, and complicated relationship between Mary Cassatt and Edgar Degas, yet it encompasses so much more…Oliveira has woven a rich tapestry of the artist's life in belle epoque Paris, in a close, intimate rendering rather than a grand, sweeping landscape. Readers who enjoy historical fiction set in this time period will enjoy the novel, as will those who like fictionalized accounts of historical figures.” —Library Journal
“Oliveira draws from research and imagination to recreate the years when two impressionists—Mary Cassatt and Edgar Degas—engaged in an on-again, off-again relationship…Accomplished and well-researched.” —Kirkus Reviews

Robin Oliveira is the New York Times bestselling author of My Name Is Mary Sutter. She holds a BA in Russian and studied at the Pushkin State Russian Language Institute in Moscow. She received an MFA in writing from Vermont College of Fine Arts and is also a registered nurse, specializing in critical care. She lives in Seattle.