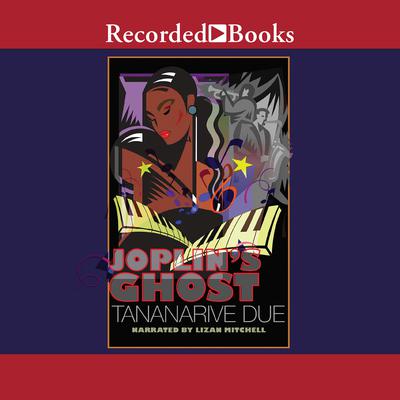 By Tananarive Due
Read by Lizan Mitchell

From the award-winning writer of The Good House, The Living Blood, and more, Joplin's Ghost is a chilling tale of a star-in-the-making whose life goes haywire as she is haunted by the ghost of a long-dead music legend. When Phoenix Smalls was ten, she nearly died at her parents' jazz club when she was crushed by a turn-of-the-century piano. Now twenty-four, Phoenix is launching a career as an R & B singer. She's living the life young artists envy and seems destined for fame and fortune. But a chance visit to a historical site in St. Louis ignites a series of bizarre, erotic encounters with a spirit who may be the King of Ragtime, Scott Joplin. The music of Scott Joplin is strange enough to the ears of the hip-hop generation, but the idea that these antique sounds are being channeled by the protegee of rap superstar G-Ronn is nothing short of ludicrous. With growing violence in G-Ronn's inner circle and a ghost bent on living forever through her, Phoenix's life suddenly hangs in the balance," writes Tananarive Due. Can the power of her own inner song and the love of a music writer who believes in her give Phoenix the strength to fight to live out her own future? Or will she be trapped forever in Scott Joplin's doomed, tragic past?

Tananarive Due is a former features writer and columnist for the Miami Herald. She has written two highly acclaimed novels, The Between and My Soul to Keep. Ms. Due makes her home in Longview, Washington.