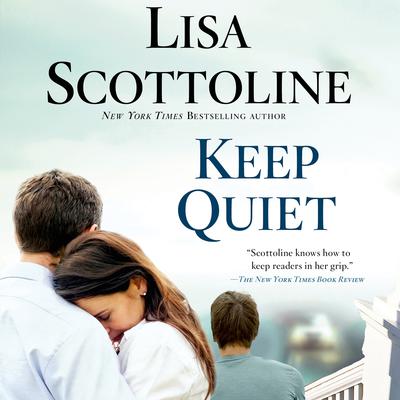 New York Times bestselling and Edgar Award winning author Lisa Scottoline is loved by millions of readers for her suspenseful novels about family and justice. Scottoline delivers once again with Keep Quiet, an emotionally gripping and complex story about one man's split-second decision to protect his son - and the devastating consequences that follow. Jake Buckman's relationship with his sixteen-year-old son Ryan is not an easy one, so at the urging of his loving wife, Pam, Jake goes alone to pick up Ryan at their suburban movie theater. On the way home, Ryan asks to drive on a deserted road, and Jake sees it as a chance to make a connection. However, what starts as a father-son bonding opportunity instantly turns into a nightmare. Tragedy strikes, and with Ryan's entire future hanging in the balance, Jake is forced to make a split-second decision that plunges them both into a world of guilt and lies. Without ever meaning to, Jake and Ryan find themselves living under the crushing weight of their secret, which threatens to tear their family to shreds and ruin them all. Powerful and dramatic, Keep Quiet will have listeners and book clubs debating what it means to be a parent and how far you can, and should, go to protect those you love.

Every parent's worst nightmare is brought chillingly to life by narrator Ron Livingston. He deftly captures the story's many characters and as the terror grows, his measured approach keeps the story believable… a riveting listening experience. —AudioFile Magazine
“This fast-paced thriller keeps the reader engaged until the very end. —Library Journal
“Engulfs readers with moral dilemmas even as it locks them in its suspense. One read you won’t forget.” —Barnes & Noble, editorial review
“Scottoline has written another winning novel of unparalleled suspense.” —Library Journal (starred review)
“Suspenseful…Lisa Socttoline keeps the tension high, while portraying a family in turmoil. A heck of a twist ending.” —Booklist
“Every parent’s worst nightmare is brought chillingly to life by narrator Ron Livingston in this engaging mystery. When Jake allows his sixteen-year-old son, Ryan, to drive past the curfew of his learner’s permit, he has no idea of the harrowing repercussions he will unleash on himself, his happy family, and their future. Livingston deftly captures the story’s many characters—parents, teachers, other adults, and Ryan’s classmates. However, his best characters are sensitive, boyish Ryan and genial Doctor Dave—or, at least, that’s how he seems at first. As the terror grows, Livingston’s measured approach keeps the story believable. The surprise conclusion and epilogue also contribute to the riveting listening experience.” —AudioFile