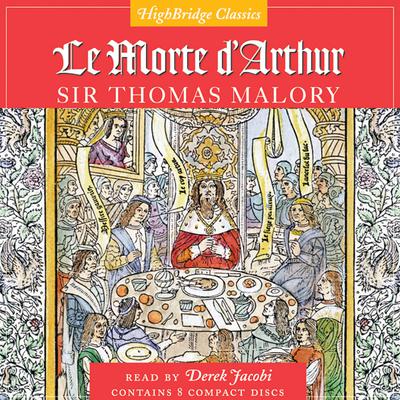 For over 1,000 years, tales of King Arthur and his Knights of the Round Table have enthralled people, among them Henry VIII and T. E. Lawrence. Proof of the Arthurian legend's timeless appeal is the fact that scarcely a year goes by without a new adaptation. Published in 1485, Sir Thomas Malory's epic poem Le Morte d'Arthur became the standard source for future Arthurian works such as Idylls of the King by Lord Tennyson and T.H. White's The Once and Future King.

With its expressive, vigorous dialogue, Le Morte d'Arthur resounds with colloquial liveliness and ceremonious dignity, the style for a fifteenth-century gentleman. This audio recording grips the listener with the fascinating, fateful story of Arthur's ascension to the throne as a boy, his marriage to Guenevere, the formation of the Round Table Knights, the quest for the Holy Grail, the ill-fated passion between Lancelot and Guenevere, the treachery of Arthur's illegitimate son Mordred, and the ultimate destruction of Arthur's realm.

Sir Thomas Malory (1400?–1471) of Newbold Revel served with Richard Beauchamp, Earl of Warwick; was knighted in 1442, and was elected a member of parliament in 1445. For whatever reason, he turned to a life of irresponsible violence and spent most of his last twenty years in prison until his death in 1471. It was during his imprisonment that he composed, translated, and adapted his great rendering of Arthurian material, which has served as source and influence for all succeeding Arthurian literature, including Tennyson’s Idylls of the King.