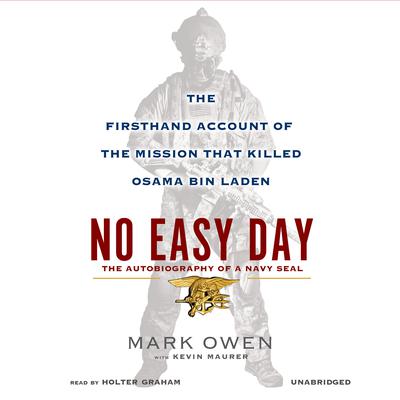 No Easy Day: The Autobiography of a Navy SEAL

By Mark Owen , with Kevin Maurer
Read by Holter Graham

An iTunes Best Audiobook of 2012

For the first time anywhere, the first-person account of the planning and execution of the Bin Laden raid from a Navy Seal who confronted the terrorist mastermind and witnessed his final moments

From the streets of Iraq to the rescue of Captain Richard Phillips in the Indian Ocean, and from the mountaintops of Afghanistan to the third floor of Osama Bin Laden's compound, operator Mark Owen of the U.S. Naval Special Warfare Development Group—commonly known as SEAL Team Six—has been a part of some of the most memorable special operations in history, as well as countless missions that never made headlines.

No Easy Day puts readers alongside Owen and the other handpicked members of the twenty-four-man team as they train for the biggest mission of their lives. The blow-by-blow narrative of the assault, beginning with the helicopter crash that could have ended Owen's life straight through to the radio call confirming Bin Laden's death, is an essential piece of modern history.

In No Easy Day, Owen also takes readers onto the field of battle in America's ongoing War on Terror and details the selection and training process for one of the most elite units in the military. Owen's story draws on his youth in Alaska and describes the SEALs' quest to challenge themselves at the highest levels of physical and mental endurance. With boots-on-the-ground detail, Owen describes numerous previously unreported missions that illustrate the life and work of a SEAL and the evolution of the team after the events of September 11. In telling the true story of the SEALs whose talents, skills, experiences, and exceptional sacrifices led to one of the greatest victories in the War on Terror, Mark Owen honors the men who risk everything for our country, and he leaves readers with a deep understanding of the warriors who keep America safe.

“Owen and his coauthor, Kevin Maurer…ably navigate the reader through the secretive world of the SEALs, as well as Owen’s graduation into SEAL Team 6, an elite group within the SEAL elite that, along with the Army’s Delta Force, is arguably the most effective fighting unit in the world…The writing is fast-paced, and Owen and Maurer tell some good yarns in a conversational style. They also neatly capture the camaraderie, the pranks, the constant training, and the evident love that the men of SEAL Team 6 have for their jobs. Of course, the readers who are lining up to buy No Easy Day are not doing so to read just another SEAL memoir. They want to know exactly what happened the night bin Laden was killed and what it felt like to be on that mission. Owen and Maurer do not disappoint. They take the reader on a roller-coaster ride, opening the book with Owen on the Black Hawk helicopter that crashed within the first seconds of the SEAL team’s arrival at bin Laden’s compound in Abbottabad, Pakistan.” —Washington Post
“Authentic enough to provoke Pentagon legal threats and convey a compelling realism. [Owen’s] meticulous narrative of the raid adds new wrinkles to the conventional account…along with atmospheric details, from the terror of an initial helicopter crash to his cleaning of blood from Bin Laden’s face for identifying photos. The raid caps Owen’s well-observed memoir of training ordeals, awesome gear, bonding and banter, and special ops in Iraq and Afghanistan; coauthor Maurer shapes these missions into tense scenes of strategizing, stealth, and action…An absorbing portrait of the work-a-day soldierly professionalism that proved Bin Laden’s nemesis.” —Publishers Weekly
“Since bin Laden was a significant figure, historians will consult this book as a primary source; they, as well as most general readers, will not regret it.” —Kirkus Reviews

Mark Owen is a former member of the US Naval Special Warfare Development Group, commonly known as SEAL Team Six. In his many years as a Navy SEAL, he participated in hundreds of missions around the globe, including the rescue of Captain Richard Phillips in the Indian Ocean in 2009. He was a team leader on Operation Neptune Spear in Abbottabad, Pakistan, on May 1, 2011, which resulted in the death of Osama bin Laden. Owen was one of the first men through the door on the third floor of the terrorist mastermind’s hideout, where he witnessed bin Laden’s death. Mark Owen’s name and the names of the other SEALs mentioned in No Easy Day have been changed for their security.