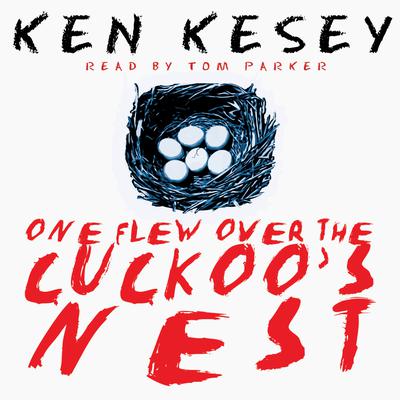 One Flew Over the Cuckoo’s Nest

Boisterous, ribald, and ultimately shattering, Ken Kesey’s One Flew Over the Cuckoo’s Nest is the seminal novel of the 1960s that has left an indelible mark on the literature of our time.

You’ve never met anyone like Randle Patrick McMurphy. He’s a boisterous, brawling, fun-loving rebel who swaggers into the ward of a mental hospital and takes over. He’s a lusty, profane, life-loving fighter who rallies the other patients around him by challenging the dictatorship of Big Nurse. He promotes gambling in the ward, smuggles in wine and women, and at every turn, openly defies her rule.

The contest starts as sport, with McMurphy taking bets on the outcome, but soon it develops into a grim struggle for the minds and hearts of the men, an all-out war between two relentless opponents: Big Nurse, backed by the full power of authority, and McMurphy, who has only his own indomitable will. What happens when Big Nurse uses her ultimate weapon against McMurphy provides the story’s shocking climax.

“A glittering parable of good and evil.” —New York Times Book Review
“[Kesey’s] book is a strong, warm story about the nature of human good and evil...A roar of protest against middlebrow society's rule and the invisible rulers who enforce them.” —Time
“Mr. Kesey has created a world that is convincing, alive, and glowing within its own boundaries…His is a large, robust talent, and he has written a large, robust book.” —Saturday Review
“Is it a tale of good versus evil, sanity over insanity, or humankind trying to overcome repression amid chaos? Whichever, it is a great read.” —Library Journal
“You feel this book along your spine.” —Kansas City Star
“This is a thoroughly enthralling, brilliantly tempered novel, peopled by at least two unforgettable characters…Make no mistake about it; this is a ward and not a microcosm.” —Kirkus Reviews

Ken Kesey (1935–2002) was born in Colorado and grew up in Oregon. As a young man he exhibited the charisma and imagination that would later make him an icon and one of the founders of the American counterculture. He received a scholarship to attend Stanford University, where he enrolled in the creative writing program. His first book, One Flew over the Cuckoo’s Nest, was followed by Sometimes a Great Notion. His bus trip from California to New York City with his friends, who called themselves the Merry Pranksters, became the subject of Tom Wolfe’s book The Electric Kool-Aid Acid Test.