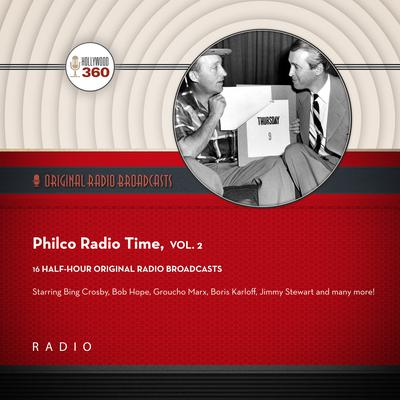 Bing Crosby sings popular songs of the era and welcomes the biggest names in Hollywood to join in on the fun!

﻿Philco Radio Time came to ABC radio in 1946 and starred Bing Crosby in a half-hour weekly series of music, comedy, and fun. Each week, Bing sang the most popular songs of the day and invited his Hollywood friends to pay a visit, including Bob Hope, Jack Benny, Lucille Ball, Jimmy Durante, Al Jolson, Danny Kaye, Boris Karloff, Frank Sinatra, and many others. Regulars each week included Peggy Lee and the John Scott Trotter Orchestra. Philco Radio Time was the first pre-recorded program to air on a major US network. Pre-recording the show was how ABC and sponsor Philco were able to convince the busy Bing Crosby to sign on—it gave the crooner flexibility to record the show around his busy film and golf schedule. At first the series was recorded on sixteen-inch transcription discs, but then used Ampex tape recorders. It lasted on radio until 1949. Enjoy sixteen episodes from this beloved radio series!