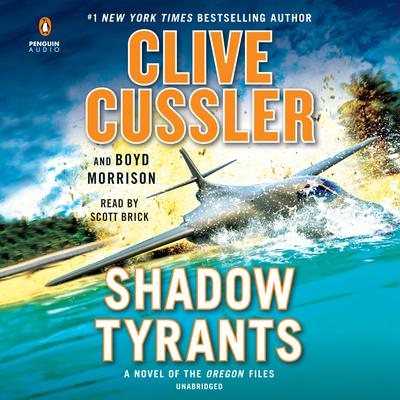 By Clive Cussler  and  Boyd Morrison
Read by Scott Brick

Only Juan Cabrillo and the crew of the Oregon stand between two warring moguls and global havoc in this thrilling suspense novel in Clive Cussler's #1 New York Times bestselling series.

Nearly two thousand years ago, an Eastern emperor charged a small group with safeguarding secrets powerful enough to change the history of mankind. They went down in legend as the Nine Unknown Men--and now two rival factions of their descendants are fighting a mighty battle. Both sides think they are saving the world, but their tactics could very well bring about the end of humankind. Soon, Juan Cabrillo and his team of expert operatives aboard the Oregon find themselves trapped between two power-hungry adversaries, both of whom are willing to use shocking means to accomplish their goals.

Cabrillo and the team must divide and conquer as they fight dual threats, which include a supercomputer at sea and satellites that can wipe out technology across the globe--including the high-tech weapons on board the Oregon. The crew must rely on their unique skills to stop the tyrants in their tracks and save the earth from a dynasty of terror.

“Cussler and action-adventure fans will love this latest Oregon Files novel. New characters to the team are most welcome, and the sheer insanity of the story line will keep readers guessing about what’s going on until the last page of the book. Chapter one has the pacing of the climax of other thriller novels, and the pace from that fast start does not let up until the end. Shadow Tyrants is one of the better entries in Cussler’s world.” —Associated Press
“A novel that crackles with intensity and maintains a high level of suspense from start to finish.” —BookReporter
“Plenty of action.” —Publishers Weekly

Boyd Morrison is an author, actor, and engineer. He started his career working on the NASA space station project. After earning a PhD in engineering from Virginia Tech, he used his training to develop US patents for various companies as well as manage video game testing for the Xbox division of Microsoft. Now a full-time writer, he has written several popular novels. He lives in Seattle.