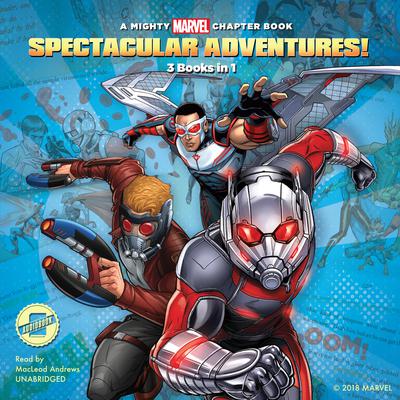 AWESOME STORIES THAT PACK A PUNCH!

Falcon holds down the fort!

With the Avengers off chasing Thanos, Falcon is looking after Avengers Tower. Everything seems fine until the evil Super Villain Ultron decides to strike, forcing Falcon to recruit some familiar faces! Will he be able to lead the new Avengers to victory? IT’S FIGHT OR FLIGHT!

Star-Lord is having a blast on Planet Knowhere—that is, until he gets a visit from Captain Marvel. She is on a mission searching for a shape-shifter who could destroy entire planets, including Earth! Can Star-Lord save Earth and the Guardians when he has KNOWHERE TO RUN?

As the astonishing Ant-Man, Scott Lang can communicate with insects and shrink to the size of an ant. Although these may not seem like impressive powers, they come in handy when a deadly virus spreads through New York City. It’s time for the smallest hero to step up and bite back with extra-strength ZOMBIE REPELLENT!