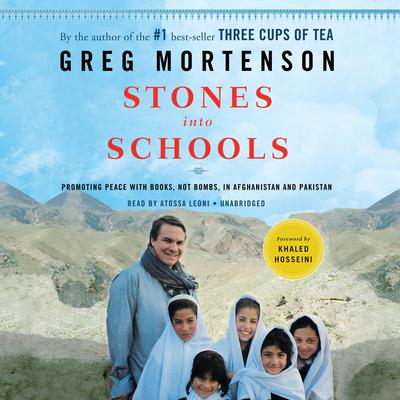 Stones into Schools: Promoting Peace with Books, Not Bombs, in Afghanistan and Pakistan

Winner of a Nautilus Book Award

From the author of the #1 New York Times bestseller Three Cups of Tea comes the continuing story of this determined humanitarian's efforts to promote peace through education.

In this dramatic first-person narrative, Greg Mortenson picks up where Three Cups of Tea left off in 2003, recounting his relentless, ongoing efforts to establish schools for girls in Afghanistan; his extensive work in Azad Kashmir and Pakistan after a massive earthquake hit the region in 2005; and the unique ways he has built relationships with Islamic clerics, militia commanders, and tribal leaders. He shares for the first time his broader vision to promote peace through education and literacy, as well as touching on military matters, Islam, and women—all woven together with the many rich personal stories of the people who have been involved in this remarkable two-decade humanitarian effort.

Since the 2006 publication of Three Cups of Tea, Mortenson has traveled across the US—and the world—to share his vision with hundreds of thousands of people. He has met with heads of state, top military officials, and leading politicians who all seek his advice and insight. The continued phenomenal success of Three Cups of Tea proves that there is an eager and committed audience for Mortenson's work and message.

“[Stones into Schools is] suffused with its author’s unorthodox tactics and distinctive personal style…It offers some all-important insight into how, exactly, they cut through bureaucratic red tape and accomplish miracles with very little money…As Stones into Schools chronicles the institute’s work, it captures the physical and political landscapes of Afghanistan in ways that make it exceptionally timely and compelling.” —New York Times
“Those inspired by Three Cups of Tea will revel in his continuing crusade. Four stars.” —People
“The careful line [his Central Asia Institute] treads between former mujahideen commanders, ex-Taliban and village elders, and the American soldiers stationed in their midst is poetic in its political complexity and compassionate consideration. Using schools not bombs to promote peace is a goal that even the most hard-hearted can admire, but to blandly call this book inspiring would be dismissive of all the hard work that has gone into the mission in Afghanistanas well as the efforts to fund it. Mortenson writes of nothing less than saving the future, and his adventure is light-years beyond most attempts.” —Booklist (starred review)
“Stones into Schools, a sequel that is at least as good as its inspiring predecessor…Makes a compelling case for what Mortenson calls the Girl Effect—the importance of educating girls and young women in the developing world…A compelling first-person account that, ironically, is less about Mortenson than it is about the accomplishments of the ‘Dirty Dozen,’ the ragtag local staff that has assembled around Mortenson’s school-building effort.” —BookPage
“A heartening follow-up to the bestselling Three Cups of Tea…In his humble, winning style, the author writes of making peace with the US Army, whose bombing caused enormous civilian bloodshed. Three Cups of Tea is now required reading for counterinsurgency officers, and Mortenson effectively demonstrates the ‘cascade of positive changes triggered by teaching a single girl how to read and write.’ Inspiring evidence of the tsunami effects of a committed humanitarian.” —Kirkus Reviews
“Leoni brings living color to the author’s intimate descriptions of the scenery, inhabitants, and religion of the eastern Himalayas. The many tender stories proclaim the hope the author’s organization brings to these communities in need.” —AudioFile
"Stones into Schools has more characters, more regions to consider, more obstacles to overcome, more history to digest [than Three Cups of Tea]. At times, these ‘mores’ can require a slow and careful read. But be not discouraged: Like the trouble it takes to build these important and life-enriching schools, endeavoring to better understand this region through Stones into Schools is worth the effort." —Los Angeles Times

Greg Mortenson is the recipient of Pakistan’s highest civil award, The Star of Pakistan, for his sixteen years of work to promote education and peace. The cofounder of the Central Asia Institute and Pennies for Peace, he lives in Montana with his family.