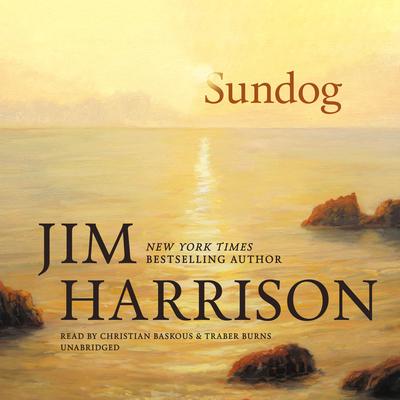 By Jim Harrison
Read by Christian Baskous  and Traber Burns

The New York Times bestselling author of numerous books of fiction, nonfiction, and poetry, including Legends of the Fall, Dalva, and Returning to Earth, Jim Harrison was one of our most beloved and acclaimed writers, adored by both readers and critics.

Sundog is a powerful novel about the life and loves of a foreman named Robert Corvus Strang, who worked on giant dam projects around the world until he was crippled in a fall down a three-hundred-foot dam. Now as he tries to regain use of his legs, he has a chance to reassess his life, and a blasé journalist who has heard of Strang’s reputation in the field arrives to draw him out about his various incarnations.

Strang, who has the violently heightened sensibilities of a man who has gone to the limits and back, recounts his monumental life moving from Michigan to Africa and the Amazon, including his several marriages, his children, and dozens of lovers. Sundog is a story as true and gripping as real life, and ultimately as victorious.

“First-rate fiction…told with a poet’s grace and passion. The characters are rich and complex.” —Detroit Free Press
“Harrison is brilliant at portraying this wild country…This is a book of the spirit.” —San Francisco Chronicle