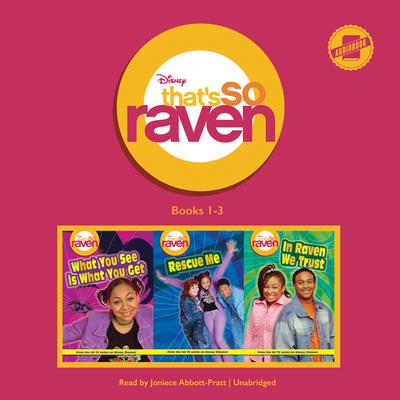 That’s So Raven: Books 1–3: What You See Is What You Get, Rescue Me, and In Raven We Trust

Teenager Raven Baxter has a special talent: she frequently gets spotty visions of the future, seeing brief glimpses of what could or will come to pass. This collection includes the first three books in the That’s So Raven series.

That’s So Raven #1: What You See Is What You Get

When Raven gets paired up with Ben “Stinky” Sturky for a science class project, she shudders with fear (and disgust)! He is, after all, the King of Stink. Desperate, Raven tries to entice some of the other students into being Ben’s partner, but no one falls for her bribes. So she begs her teacher to assign her a different partner. Then, all of a sudden, Raven gets a “Grade A” vision—could it mean she’s supposed to be Stinky’s partner? Will Raven be able to stick out the stench, or will she crumble under the power of second-hand stink?

Raven is totally psyched about her date with an older boy. He’s cute AND he drives! So what if her parents don’t approve? She’s got her two best friends, Chelsea and Eddie, on her side to help keep it all on the down low. But the date goes horribly wrong when Mr. Hottie turns out to be Mr. Not-tie. Who knew high-school guys chew with their mouths open—yuck! Raven definitely didn’t see this one coming! Can she escape the world’s worst date and return home unnoticed, or will she get busted by Mom and Dad?

That’s So Raven #3: In Raven We Trust

Eddie made starting guard on the basketball team and feels like he’s sittin’ on top of the world—until Raven gets a vision of him getting an F on his Spanish midterm. If this comes true, he’s off the team! So when Eddie finds out Raven also saw the answers to the test in her vision, he begs her to help him. What else are psychic friends for, right? Raven finally gives in, but soon realizes she gave Eddie the wrong answers! Will she and Chelsea be able to warn Eddie in time, or will he fail the midterm and get kicked off the team for good?