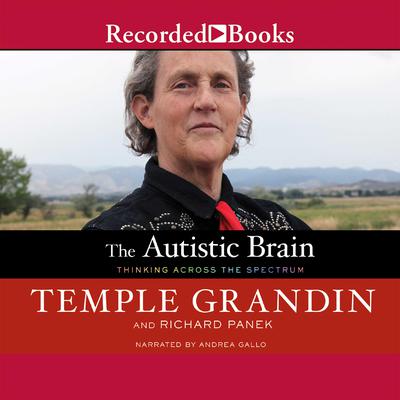 The Autistic Brain: Thinking Across the Spectrum

By Temple Grandin and Richard Panek
Read by Andrea Gallo

A cutting-edge account of the latest science of autism, from the best-selling author and advocate. When Temple Grandin was born in 1947, autism had only just been named. Today it is more prevalent than ever, with one in 88 children diagnosed on the spectrum. And our thinking about it has undergone a transformation in her lifetime: Autism studies have moved from the realm of psychology to neurology and genetics, and there is far more hope today than ever before thanks to groundbreaking new research into causes and treatments. Now Temple Grandin reports from the forefront of autism science, bringing her singular perspective to a thrilling journey into the heart of the autism revolution. Weaving her own experience with remarkable new discoveries, Grandin introduces the neuroimaging advances and genetic research that link brain science to behavior, even sharing her own brain scan to show us which anomalies might explain common symptoms. We meet the scientists and self-advocates who are exploring innovative theories of what causes autism and how we can diagnose and best treat it. Grandin also highlights long-ignored sensory problems and the transformative effects we can have by treating autism symptom by symptom, rather than with an umbrella diagnosis. Most exciting, she argues that raising and educating kids on the spectrum isn' t just a matter of focusing on their weaknesses; in the science that reveals their long-overlooked strengths she shows us new ways to foster their unique contributions. From the "Aspies" in Silicon Valley to the five-year-old without language, Grandin understands the true meaning of the word spectrum. The Autistic Brain is essential reading from the most respected and beloved voices in the field.

Temple Grandin is one of the world’s most accomplished and well-known adults with autism. She has a PhD in animal science from the University of Illinois and is a professor at Colorado State University. She is the author of several books, including the national bestsellers Thinking in Pictures and Animals in Translation. She is a frequent lecturer at autism meetings throughout the country. Her work has been covered in the New York Times, People, National Public Radio, and 20/20. She has also been named one of Time Magazine‘s 100 most influential people of the year. The HBO movie based on her life, starring Claire Danes, received seven Emmy Awards.

Richard Panek is the recipient of a Guggenheim fellowship and the author of The Invisible Century and Seeing and Believing. He has frequently written for the New York Times as well as Discover, Smithsonian, Esquire, and Outside, among other publications. He lives with his wife, Meg Wolitzer, and their two sons.