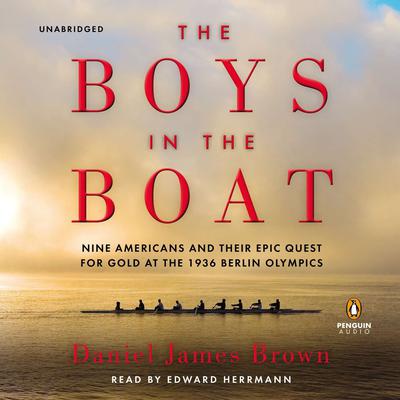 The Boys in the Boat: Nine Americans and Their Epic Quest for Gold at the 1936 Berlin Olympics

Winner of the 2014 Indies Choice Book Award for Book of the Year: Adult Nonfiction

A 2014 ALA Notable Book for Adult Nonfiction

For readers of Unbroken, out of the depths of the Depression comes an irresistible story about beating the odds and finding hope in the most desperate of times—the improbable, intimate account of how nine working-class boys from the American West showed the world at the 1936 Olympics in Berlin what true grit really meant.

It was an unlikely quest from the start. With a team composed of the sons of loggers, shipyard workers, and farmers, the University of Washington’s eight-oar crew team was never expected to defeat the elite teams of the East Coast and Great Britain, yet they did, going on to shock the world by defeating the German team rowing for Adolf Hitler. The emotional heart of the tale lies with Joe Rantz, a teenager without family or prospects, who rows not only to regain his shattered self-regard but also to find a real place for himself in the world. Drawing on the boys’ own journals and vivid memories of a once-in-a-lifetime shared dream, Brown has created an unforgettable portrait of an era, a celebration of a remarkable achievement, and a chronicle of one extraordinary young man’s personal quest.

—
An ideal pairing of talent and material. —Mary Roach, The New York Times
A remarkable book...hard to put down. —The Seattle Times
“This riveting tale of beating the odds (and the Germans) at the 1936 Olympics is a rousing story of American can-do-ism. It’s also a portrait of the nine boys who first rowed together for the University of Washington and of the one in particular who made the sport his family and his home.” —Parade
This deft slice of regional history will attract disaster and weather buffs as well as fans of Norman Maclean’s standout book, Young Men and Fire. —Publishers Weekly (starred review)
A compelling read…capturing the stories of heroism and loss with imagination and attention-grabbing skill. —The Minneapolis Star-Tribune
“Cogent history… and a surprisingly suspenseful tale of triumph.” —USA Today
“For those who like adventure stories straight up...It’s about the University of Washington’s crew team: ‘Nine working-class boys from the American West who at the 1936 Olympics showed the world what true grit really meant.’” —New York Times
“If you imagined a great regatta of books about rowing, then Brown’s The Boys in the Boat certainly makes the final heat.” —Boston Globe
“This riveting and inspiring saga evokes that of Seabiscuit…Readers need neither background nor interest in competitive rowing to be captivated by this remarkable and beautifully crafted history. Written with the drama of a compelling novel, it's a quintessentially American story that burnishes the esteem in which we embrace what has come to be known as the Greatest Generation.” —Associated Press
“Brown’s book juxtaposes the coming together of the Washington crew team against the Nazis’ preparations for the Games, weaving together a history that feels both intimately personal and weighty in its larger historical implications. This book has already been bought for cinematic development, and it’s easy to see why: When Brown, a Seattle-based nonfiction writer, describes a race, you feel the splash as the oars slice the water, the burning in the young men’s muscles, and the incredible drive that propelled these rowers to glory.” —Smithsonian
“The individual stories of these young men are almost as compelling as the rise of the team itself. Brown excels at weaving those stories with the larger narrative, all culminating in the 1936 Olympic Games…A story this breathtaking demands an equally compelling author, and Brown does not disappoint. The narrative rises inexorably, with the final fifty pages blurring by with white-knuckled suspense as these all-American underdogs pull off the unimaginable.” —Seattle Times
“For this nautical version of Chariots of Fire, Brown crafts an evocative, cinematic prose studded with engrossing explanations of rowing technique and strategy, exciting come-from-behind race scenes, and the requisite hymns to “mystic bands of trust and affection” forged on the water. Brown lays on the aura of embattled national aspiration good and thick, but he makes his heroes’ struggle as fascinating as the best Olympic sagas.” —Publishers Weekly
“A touching, fairly uncomplicated portrayal of rowing legends.” —Kirkus Reviews

Daniel James Brown grew up in the San Francisco Bay Area and attended Diablo Valley College, the University of California at Berkeley, and UCLA. He taught writing at San Jose State University and Stanford before becoming a technical writer and editor. He now writes narrative nonfiction books full time. His primary interest as a writer is in bringing compelling historical events to life vividly and accurately. He and his wife live in the country outside of Seattle, Washington, with an assortment of cats, dogs, chickens, and honeybees.