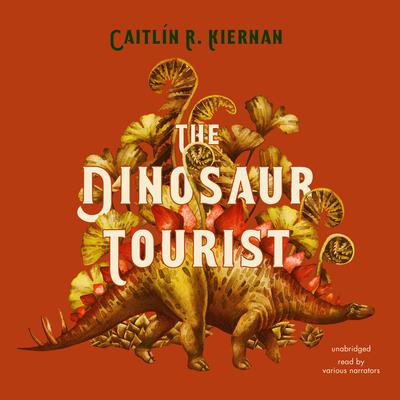 Almost nothing is only what it seems to be at first glance. Appearances can be deceiving and first impressions often lead us disastrously astray. If we’re not careful, assumption and expectation can betray us all the way to madness and death and damnation. In The Dinosaur Tourist, Caitlín R. Kiernan’s fifteenth collection of short fiction, nineteen tales of the unexpected and the uncanny explore that treacherous gulf between what we suppose the world to be and what might actually be waiting out beyond the edges of our day-to-day experience. A mirror may be a window into another time. A cat may be our salvation. Your lover may be a fabulous being. And a hitchhiker may turn out to be anyone at all.

“Superb…Kiernan’s boundlessly fertile imagination and talent for turning the everyday into the otherworldly are on fine display in one of her most accessible collections yet.” —Publishers Weekly (starred review)
“Kiernan’s densely plotted and atmospheric tales of dread—supernatural and otherwise—make for a memorably unsettling read.” —Kirkus Reviews
“Kiernan is a cartographer of lost worlds and constantly writes about thresholds: those harsh spaces in between two realities that she relishes being crossed, if not transgressed.” —New York Times on The Drowning Girl

Caitlín R. Kiernan was born near Dublin, Ireland, but has spent most of her life in the southeastern United States. In 1992, she began writing her first novel, The Five of Cups (it remained unpublished until 2003). Her first published novel, Silk (1998), earned her two awards and praise from critics and such luminaries as Neil Gaiman, Clive Barker, Peter Straub, and Poppy Z. Brite. Her next novel, Threshold (2001), was also an award-winner. She is a prolific short fiction author, and her award-winning short stories have been collected in numerous volumes. Her short science fiction novel The Dry Salvages was published in 2004.