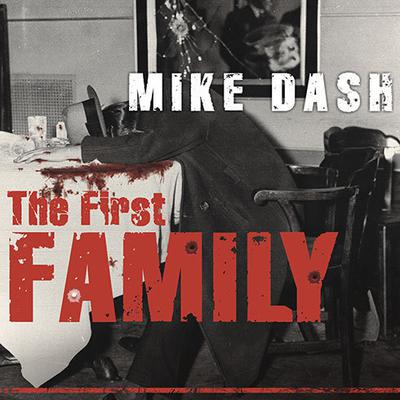 The First Family: Terror, Extortion, Revenge, Murder, and the Birth of the American Mafia

Before the Five Families who so notoriously dominated U.S. organized crime for a bloody half-century, there was the one-fingered, surpassingly cunning Giuseppe Morello and his murderous coterie of brothers. Born into a life of poverty in rural Sicily, Morello became an American nightmare, pioneering the bizarre initiation rituals, imaginative protection rackets, influential underworld reigns, and Mafia wars later popularized by countless books, television shows, and movies. In The First Family, Mike Dash tells the little known story of the Morello family. He follows the birth of the Mafia in America from the 1890s to the 1920s, from the wharves of New Orleans—where Morello himself disembarked in the United States—to the streets of Little Italy. Using previously untapped secret service archives, prison records, and interviews with surviving family members, Dash brings to life the remarkable villains and unusual heroes of the Mafia's early years, from the colorful members of the Morello family to Joseph Petrosino, an Italian cop with a thick Naples accent, and William Flynn, a dogged U.S. Secret Service agent, who banded together to bring down Morello. More than just a pulse-quickening Mafia narrative, The First Family is the first authoritative account of a particularly crucial period in American history, in which the modern American underworld was born.

Altogether excellent.... Dash writes with flair and care alike. —Kirkus Starred Review
“We are reminded by Mike Dash’s first-rate book…that there is nothing pretty or civilized about organized crime, that its bloody origins are the key to its true character.” —Washington Post
“Dash is a terrific historical researcher and storyteller…Dash covers in great, and sometimes gruesome detail, the rival Mafiosi who rose up to challenge Morello.” —Chicago Sun-Times
“[Listeners] may think they know the mob, but Morello’s ruthless rule makes even the fictional Tony Soprano look tame.” —Publishers Weekly (starred review)
“Altogether excellent…Dash writes with flair and care alike.” —Kirkus Reviews (starred review)
“James’s narration remains calm and balanced…Well written and well read.” —AudioFile

Mike Dash is a historian with an MA from Cambridge University and a PhD from the University of London. A former professional journalist with articles in numerous national newspapers and magazines, Dash is the author of many books, including Satan’s Circus, Thug, Batavia’s Graveyard, and Tulipomania. He lives in London with his wife and daughter.