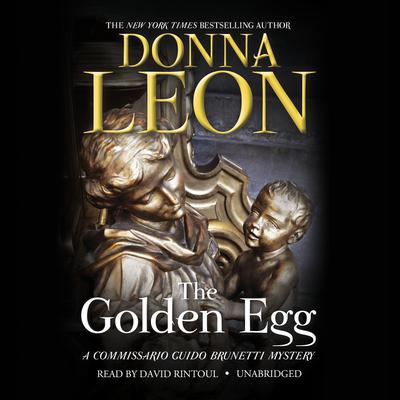 Over the years, the bestselling Commissario Guido Brunetti series has conquered the hearts of mystery lovers all over the world. Brunetti is both a perceptive investigator and a principled family man, and through him, Leon has explored Venice in all its aspects: its history, beauty, food, and social life, but also its crime and corruption. In The Golden Egg, as the first leaves of autumn begin to fall, Vice Questore Patta asks Brunetti to look into a minor violation committed by the mayor's future daughter-in-law. Brunetti has no interest in helping his boss amass political favors, but he has little choice but to comply. Then Brunetti's wife, Paola, comes to him with a request of her own. The mentally handicapped man who worked at their dry cleaners has just died of a sleeping pill overdose, and Paola loathes the idea that he lived and died without anyone noticing him, or helping him. To please his wife, Brunetti investigates the death, and is surprised to find nothing on the man: no birth certificate, no passport, no driver's license, no credit cards. As far as the Italian government is concerned, he never existed. And yet, there is the body. As secrets unravel, Brunetti suspects an aristocratic family might be somehow connected to the death. But why would anyone want this sweet, simple-minded man dead?

“David Rintoul has a smooth, assured English voice, and his Italian pronunciations are convincing and Italian accents kept to a minimum. The listener longs to join him as Brunetti, punctuating numerous vaporetto journeys with glasses of white wine, coffees, and panini.” —AudioFile
“[Readers] will savor the pleasures of dialogue as elliptical in its way as Henry James and a retrospective shock when they finally appreciate the import of the tale’s unobtrusive opening scene and its sly title.” —Kirkus Reviews

Donna Leon has lived in Venice for over thirty years and previously lived in Switzerland, Saudi Arabia, Iran, and China, where she worked as a teacher. Her New York Times bestselling novels featuring Commissario Brunetti have all been highly acclaimed, including Friends in High Places, which won the CWA Silver Dagger for Fiction.