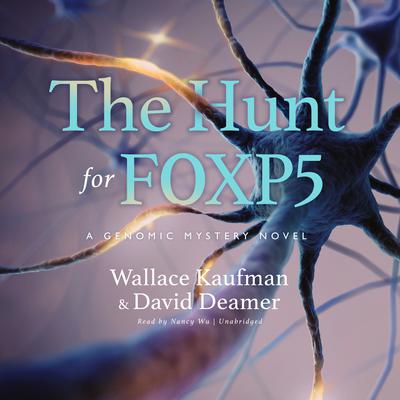 The Hunt for FOXP5: A Genomic Mystery Novel

By Wallace Kaufman  and David Deamer
Read by Nancy Wu

Genetics professor Michelle Murphy loses her husband under mysterious circumstances and without warning, while their brilliant eight-year-old daughter Avalon, adopted in Kazakhstan, stubbornly believes she is a mutant.

As if this were not enough she soon finds herself thrown into the middle of a quickly thickening plot, where the legacy of Genghis Khan meets the hunt for FOXP5, a genetic transcription factor that could herald the dawn of new human species.

Initially caught helplessly between well-meaning fellow scientists, the government, and more sinister agents, Michelle, with the help of a host of unlikely heroes, eventually takes control and finds the courage to confront the decision of whether to save human lives or humanity.

The scientific and technical aspects underlying the plot—in particular aspects of FOX proteins, genetic mutations, viruses, and cancer, as well as the relation between intelligence and cortical complexity—are introduced and discussed by the authors in an extensive nontechnical appendix.

“This title by Wallace Kaufman and David Deamer, I would say, is the best I’ve ever read…[I] enjoyed the adventure, which hovered between adult and young adult in apparent audience level, and felt I was really gaining something from the science content.” —Popular Science author Brian Clegg

Wallace Kaufman is a science writer whose fiction, nonfiction, journalism, and poetry have appeared in major magazines and newspapers in the U.S., England, and Kazakhstan. He is a graduate of Duke University and he earned an M.Litt. from Oxford University. His research and reporting has taken him to Central and South America and to the Arctic and Pacific coasts of Siberia. In Latin America he helped indigenous writers establish themselves and translated the first two books by Mayan writer Victor Montejo. In Kazakhstan he worked with Kazakhs on translations of their principal writers. His own translations of German, French, and Spanish poetry and fiction have appeared in several magazines. His books include Invasive Plants, Coming Out of the Woods, No Turning Back, and The Beaches Are Moving.