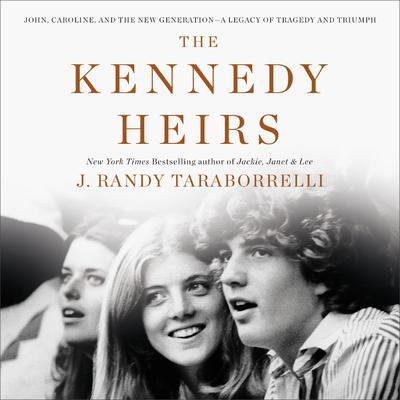 The Kennedy Heirs: John, Caroline, and the New Generation - A Legacy of Tragedy and Triumph

A unique burden was inherited by the children of President John Fitzgerald Kennedy and his celebrated siblings, Senators Robert and Ted Kennedy. Raised in a world of enormous privilege against the backdrop of American history, this third generation of Kennedys often veered between towering accomplishment and devastating defeat. In his revelatory new audiobook, acclaimed Kennedy historian J. Randy Taraborrelli draws back the curtain on the next generation of America’s most famous family.

John Kennedy, Jr.’s life in the public eye is explored, following the Kennedy scion as he faced the challenges posed by marrying his great love, Carolyn Bessette. Riveting new details are shared about the couple’s tragic demise—and why Ethel Kennedy advised Carolyn not to take the trip that would ultimately end her life. John’s sister, Caroline Kennedy, had her own complicated relationships, including a marriage to Ed Schlossberg that surprised her mother, Jacqueline Kennedy Onassis, and an unexpected bond with her mother-in-law, Mae Schlossberg.

Additional stories, many shared here for the first time, illuminate the rest of the Kennedy dynasty: Kara Kennedy, Ted’s daughter, and her valiant battle against lung cancer; how Ted’s wife, Vicki, introduced a new era of feminism to the Kennedy family; the lifelong struggles with addiction faced by Bobby Kennedy Jr. and Patrick Kennedy; the unexpected way pop star Taylor Swift helped Conor Kennedy heal after the death of his mother, Bobby’s wife Mary; and Congressman Joe Kennedy III’s rise to prominence. At the center of it all is the family’s indomitable matriarch, Ethel Kennedy—a formidable presence with her maddening eccentricities and inspiring courage.

Based on hundreds of exclusive first-hand interviews and cultivated over twenty years of research—including numerous Oral Histories from the JFK Library and the Edward M. Kennedy Institute—The Kennedy Heirs is an epic drama of ambition, scandal, pride and power.

J. Randy Taraborrelli is the author of numerous books, including the New York Times bestsellers Call Her Miss Ross; Michael Jackson; Sinatra; Madonna; Jackie, Ethel, Joan; and Elizabeth. The Los Angeles writer is not only a respected journalist but also a recognizable entertainment personality and in-demand guest on many television programs, including Today, Good Morning America, The Early Show, Entertainment Tonight, The Insider, and CNN Headline News. Additionally, he works for CBS News as a news analyst.