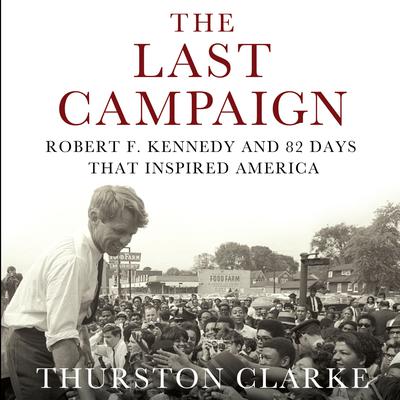 With new research and previously unavailable interviews, The Last Campaign provides an intimate and absorbing historical narrative that goes right to the heart of America's deepest despairs—and most fiercely held dreams—and tells us more than we had understood before about this complicated man and the heightened dramas of his times. After John F. Kennedy's assassination, Robert Kennedy looked past his own pain to that of this country, and he sought to offer it hope. And when he announced that he was running for president, the country united in hope behind him. Over the action-packed eighty-two days of his campaign, Americans were inspired by Kennedy's promise to lead them toward a better time—until an assassin's bullet stopped this last great stirring public figure of the 1960s.

Clarke's The Last Campaign is the definitive account of Robert Kennedy's exhilarating and tragic 1968 campaign for president—and a revelatory history that is especially resonant now.

Thurston Clarke has written eleven widely acclaimed works of fiction and nonfiction, including three New York Times Notable Books. His Pearl Harbor Ghosts was the basis of a CBS documentary and his bestselling Lost Hero, a biography of Raoul Wallenberg, was made into an award-winning NBC miniseries. His articles have appeared in Vanity Fair, the New York Times, the Washington Post, and many other publications. A recipient of the prestigious Guggenheim Fellowship, among other awards, he lives with his wife and three daughters in upstate New York.