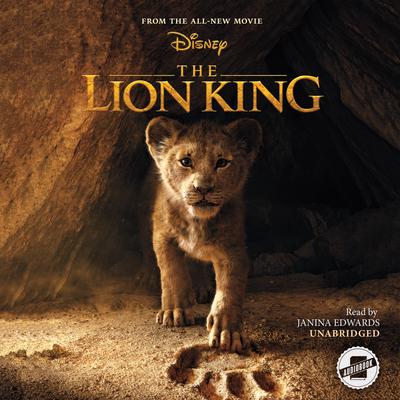 A 2020 Audie Award Finalist for Best Narration for Young Listeners

EVERYTHING THE LIGHT TOUCHES IS THEIR KINGDOM.

When a lion cub named Simba is born, his father, King Mufasa, introduces him to the beautiful Pride Lands he will one day rule.

But when Mufasa is killed unexpectedly, young Simba blames himself. Unable to face his family, he runs away, leaving the Pride Lands under the rule of his evil uncle, Scar. Years later, the young prince must make a choice. Will he reclaim his homeland or turn his back on the kingdom in its darkest hour?

Elizabeth Rudnick has written over thirty books, including the original novel Tweet Heart and tie-ins such as Frankenweenie, Oz: The Great and Powerful, and the bestselling junior novel based on Pirates of the Caribbean: Dead Man’s Chest. She lives on Cape Cod with her husband and two lovable mutts, Jack and Ginger.

Disney Publishing Worldwide (DPW) is the world’s largest publisher of children’s books, magazines, and apps, with over 700 million products sold each year. DPW consists of an extensive worldwide books and magazines licensing structure as well as vertically integrated publishing imprints, including Disney-Hyperion and Disney Press in the US and Disney Libri in Italy. DPW’s digital products include bestselling e-book titles and award-winning original apps. Disney English is DPW’s English language learning business, which includes learning centers in China and a worldwide retail-licensing program. Headquartered in Glendale, California, DPW publishes books, magazines, and digital products in 85 countries in 75 languages. For more information visit www.disneypublishing.com.