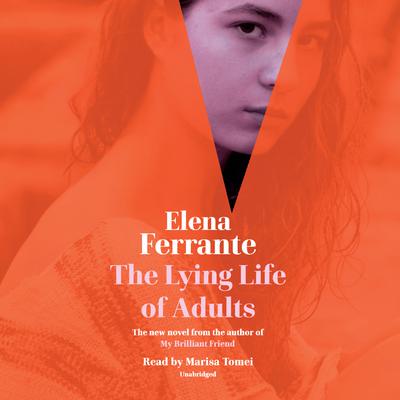 The Lying Life of Adults

Finalist for the Kirkus Prize in Fiction

A BookPage Best Book of the Year

A Kirkus Reviews Pick of the Month

A Parade Magazine Pick of Most Anticipated Books of Fall

A Booklist Pick of the Fall's Most Anticipated Audiobooks

A powerful new novel set in a divided Naples by Elena Ferrante, the beloved best-selling author of My Brilliant Friend.

Giovanna's pretty face has changed: it's turning into the face of an ugly, spiteful adolescent. But is she seeing things as they really are? Into which mirror must she look to find herself and save herself?

She is searching for a new face in two kindred cities that fear and detest one another: the Naples of the heights, which assumes a mask of refinement, and the Naples of the depths, which professes to be a place of excess and vulgarity. She moves between these two cities, disoriented by the fact that, whether high or low, the city seems to offer no answer and no escape.

“A wild shuffle of moments exhilarating and torturous, The Lying Life of Adults reads like a distillation of adolescence itself.” —Vogue
“There’s no doubt [the publication of The Lying Life of Adults] will be the literary event of the year.” —Elle magazine
“The most intense writing about the experiences and interior life of a girl on the cusp of adulthood that I have ever read. It is brilliant.” —Financial Times (London)
“Ferrante makes Naples come alive in her latest literary feat.” —Newsweek
“Goldstein’s fluid translation once again allows readers into the head of a young woman recalling with precision and emotion a series of events which lead to a point of confession…A girl, a city, an inhospitable society: Ferrante’s formula works again.” —Kirkus Reviews (starred review)
“Actress Marisa Tomei’s dramatic reading…brings depth to Giovanna as she privately expresses her innermost thoughts but speaks to her family with a sullen teenage attitude. Tomei’s portrayal of Vittoria, with her crudeness and explosive moods, is raspy and guttural. One can even hear a trace of Neapolitan dialect…Winner of the AudioFile Earphones Award.” —AudioFile

Elena Ferrante, author of The Days of Abandonment, Troubling Love, and My Brilliant Friend, among others, is one of Italy’s most important and acclaimed contemporary writers. She was named one of the 100 Most Influential People of 2016 by Time.