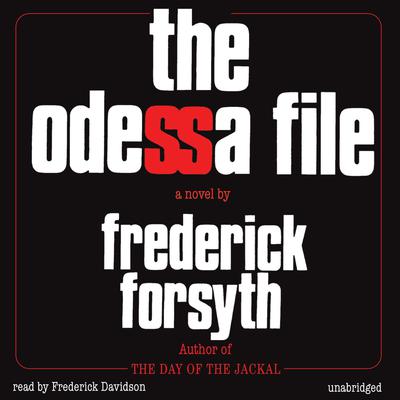 Frederick Forsyth’s spellbinding novels are the natural outgrowth of an adventuresome career in international investigative journalism. Written in Austria and Germany during the fall of 1971, The Odessa File is based on its author’s life experiences as a Reuters man reporting from London, Paris, and East Berlin in the early 1960s.

The “Odessa” of this title is an acronym for the secret organization which has protected the identities and advanced the destinies of former members of Hitler’s dreaded SS since shortly before the end of World War II. One of its rare major defeats came in the spring of 1964, when a packet of dossiers arrived anonymously at the Ministry of Justice in Bonn. How and why a once carefree young German freelance journalist came to send the packet is told in this brilliant tale of suspense.

“A carefully thought-out, meticulously researched, documented…highly suspenseful work of  fiction.” —Chicago Tribune
“A highly superior combination of real-life facts and suspense fiction.” —Publishers Weekly
“Intriguingly fact-packed with relentless exporting, a protagonist propelled by an unstoppable force as suicidal as that of a lemming, and a time-factored chase ticking off to an explosive climax.” —Cleveland Press
“Every bit as exciting as its noted predecessor and even eerie.” —Cosmopolitan (UK)