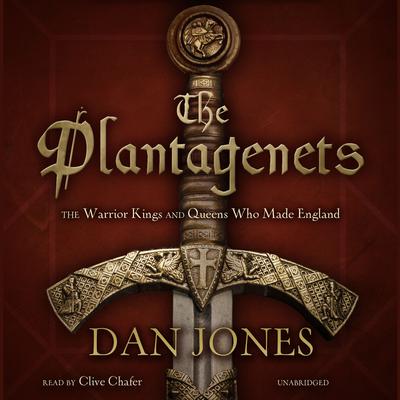 The Plantagenets: The Warrior Kings and Queens Who Made England

The first Plantagenet king inherited a blood-soaked kingdom from the Normans and transformed it into an empire that stretched at its peak from Scotland to Jerusalem. In this epic history, Dan Jones vividly resurrects this fierce and seductive royal dynasty and its mythic world. We meet the captivating Eleanor of Aquitaine, twice queen and the most famous woman in Christendom; her son, Richard the Lionheart, who fought Saladin in the Third Crusade; and King John, a tyrant who was forced to grant the Magna Carta, which formed the basis of our own Bill of Rights. This is the era of chivalry, Robin Hood, and the Knights Templar, the era of the Black Death, the Black Prince, the founding of Parliament, and the Hundred Years' War.

“Dan Jones’ The Plantagenets is outstanding. Majestic in its sweep, compelling in its storytelling, this is narrative history at its best. A thrilling dynastic history of royal intrigues, violent skullduggery, and brutal warfare across two centuries of British history.” —Simon Sebag Montefiore, New York Times bestselling author
“They may lack the glamour of the Tudors or the majesty of the Victorians, but in Jones’ latest book, the Plantagenets are just as essential to the foundation of modern Britain…Written with prose that keeps the reader captivated throughout accounts of the span of centuries and the not-always-glorious trials of kingship, this book is at all times approachable, academic, and entertaining.” —Booklist
“The Plantagenets offers a glaring contrast between their even balance of outstanding kings and outstandingly bad ones. This adds to the already exciting dynamics of a dramatic period, captured to great effect in Dan Jones’ big book on a big subject…He succeeds admirably. It is traditional narrative history at its best.” —Spectator
“Dan Jones’ epic portrait of the medieval royals is a timely reminder that things haven’t always been so rosy for those on the throne. The House of Plantagenet ruled England for more than two centuries, giving us eight generations of our best and worst kings and queens—and some bloody, brutal, and brilliant tales to match.” —GQ
“This is an exciting period, and Jones describes it with verve. He has a keen appreciation of how power was seized and wielded by medieval monarchs and the way they manipulated history, religion, and symbolism in the service of kingship…Medieval history is enjoying its time in the sun again thanks to some excellent writers. Heaven be praised for that.” —New Statesman
“A novelistic historical account of the bloodline that ‘stamped their mark forever on the English imagination’…For enjoyable historical narratives, this book is a real winner.” —Kirkus Reviews
“The Plantagenets played a defining part in shaping the nation of England, and Dan Jones tells their fascinating story with wit, verve, and vivid insight. This is exhilarating history—a fresh and gloriously compelling portrait of a brilliant, brutal, and bloody-minded dynasty.” —Helen Castor, prizewinning author of She-Wolves
“This is history at its most epic and thrilling. I would defy anyone not to be right royally entertained by it.” —Tom Holland, prizewinning author
“Blood-soaked medieval England springs to vivid life in Jones’ highly readable, authoritative, and assertive history.” —Publishers Weekly
“Entertaining and informative…Jones cuts through these myths effectively, marshaling primary sources to introduce the reader to the actual men who wore the English crown…Jones’ work benefits from his colorful and engaging style…He has produced an absorbing narrative that will help ensure that the Plantagenet story remains ‘stamped on the English imagination’ for another generation.” —Sunday Times (London)
“This action-packed narrative is, above all, a great story, filled with fighting, personality clashes, betrayal, and bouts of the famous Plantagenet rage…Jones is an impressive guide to this tumultuous scene…The Plantagenets succeeds in bringing an extraordinary family arrestingly to life.” —Daily Telegraph (London)
“Excellent…Colorful and imaginative…It is unapologetically about powerful people, their foibles, their passions, and their weaknesses…The Plantagenets is a wonderful gallop through English history in the traditional way. Powerful personalities, vivid descriptions of battles and tournaments, ladies in fine velvet, and knights in shining armor crowd the pages of this highly engaging narrative.” —Evening Standard (London)
“Jones has written a magnificently rich and glittering medieval pageant, guiding us into the distant world of the Plantagenets with confidence. This riveting history of an all-too-human ruling house amply confirms the arrival of a formidably gifted historian.” —Sunday Telegraph (London)
“Jones, a protégé of David Starkey, writes with his mentor’s erudition but also exhibits novelistic verve and sympathy…This is a great popular history, whether you are au fait with the machinations of medievalism or whether Magna Carta mystifies you…The Plantagenets is proof that contemporary history can engage with the medieval world with style, wit, and chutzpah. It is a long book at more than six hundred pages but remains engaging throughout.” —Observer (London)
“A dashing historian goes swift with a colorful chronicle of the kings who made England…Jones pulls the hectic centuries into a coherent whole.” —Independent (London)
“Gripping storytelling and pin-sharp clarity…The Plantagenets is a satisfying as well as an enjoyable read. There is no need for added goblins in this real life Game of Thrones.” —Literary Review

Dan Jones is the author of The Plantagenets: The Warrior Kings and Queen Who Made England, a #1 international bestseller and a New York Times bestseller; Wars of the Roses, which charts the story of the fall of the Plantagenets and the improbable rise of the Tudors; Magna Carta: The Birth of Liberty; and Summer of Blood: England’s First Revolution. He wrote and presented the popular Netflix series Secrets of Great British Castles and appeared alongside George R. R. Martin in the official HBO film exploring the real history behind Game of Thrones. He is the historical consultant to Knightfall, a major production from A&E Studios and The History Channel on the legend of the Templars, produced by Jeremy Renner.