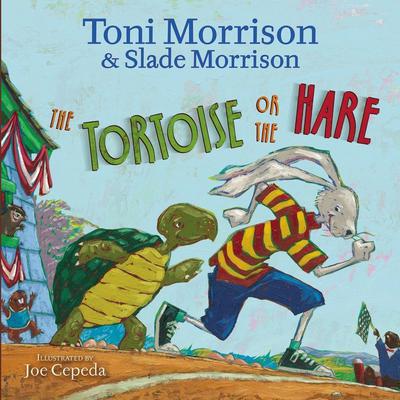 The Tortoise or the Hare

In the well-known tale of “The Tortoise and the Hare,” everyone remembers that “slow and steady wins the race”—or does it? In this energetic retelling of a favorite fable, it’s the speedy Hare who crosses the finish line first, but it’s Tortoise who has the tale to tell when he discovers that the race, not the winning, is what matters most. This witty reframing of a traditional message prompts readers to decide for themselves what really makes a winner.

Toni Morrison (1931–2019) was an American novelist, poet, essayist, editor, teacher, and professor. In 2012, President Barack Obama presented her with the Presidential Medal of Freedom. She also received the Nobel Prize for Literature, the National Book Critics Circle Award, a Pulitzer Prize for literature, an American Book Award, the Norman Mailer Prize, the PEN/Saul Bellow Award, the Condorcet Medal, the Thomas Jefferson Medal, and the Anisfield Wolf Book Award, among others. She wrote twelve novels, including Beloved, which won the 1988 Pulitzer Prize for Fiction and was made into a major motion picture starring Oprah Winfrey and Danny Glover.