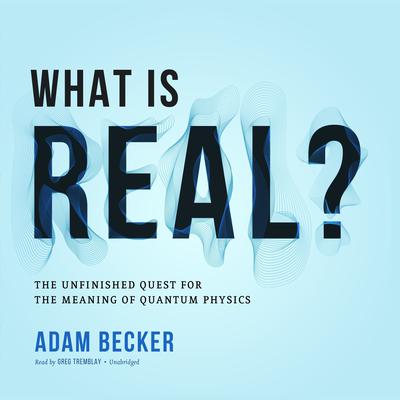 What Is Real?: The Unfinished Quest for the Meaning of Quantum Physics

Every physicist agrees quantum mechanics is among humanity’s finest scientific achievements. But ask what it means, and the result will be a brawl. For a century, most physicists have followed Niels Bohr’s Copenhagen interpretation and dismissed questions about the reality underlying quantum physics as meaningless. A mishmash of solipsism and poor reasoning, Copenhagen endured, as Bohr’s students vigorously protected his legacy and the physics community favored practical experiments over philosophical arguments. As a result, questioning the status quo long meant professional ruin. And yet, from the 1920s to today, physicists like John Bell, David Bohm, and Hugh Everett persisted in seeking the true meaning of quantum mechanics.

What Is Real? is the gripping story of this battle of ideas and the courageous scientists who dared to stand up for truth.

“Fascinating…An excellent, accessible account.” —Wall Street Journal
“A thorough, illuminating exploration of the most consequential controversy raging in modern science…one that raises thorny philosophical questions.” —New York Times
“Splendid…With deeply detailed research, accompanied by charming anecdotes about the scientists.” —Washington Post
“A riveting storyteller, Becker brings to life physicists who have too long remained in the shadow of Bohr and Einstein…. What Is Real? offers an engaging and accessible overview of the debates surrounding the interpretation of quantum mechanics.” —Science
“Becker…make[s] a case for the importance of philosophy. That’s a key call, with influential scientists such as Neil deGrasse Tyson dismissing the discipline as a waste of time. What Is Real? is an argument for keeping an open mind.” —Nature
“Becker has done a great service in putting this fascinating story together into a single easily digestible volume that is gripping, authoritative, and true….I sincerely hope it gains an extremely wide readership and manages to have a powerful influence.” —Quantum Times
“Becker’s book is one of the first attempts we have at telling…who won these debates about the Copenhagen interpretation, who lost them, who pretended otherwise, and how they got away with it…He has clearly done extensive and meticulous historical research.” — New York Review of Books
“With his crisp voice, Becker lucidly relates the complicated history of quantum foundations.” —Publishers Weekly (starred review)

Adam Becker is a science writer with a PhD in astrophysics. He has written for the BBC and New Scientist and is a visiting scholar at University of California–Berkeley’s Office for History of Science and Technology.