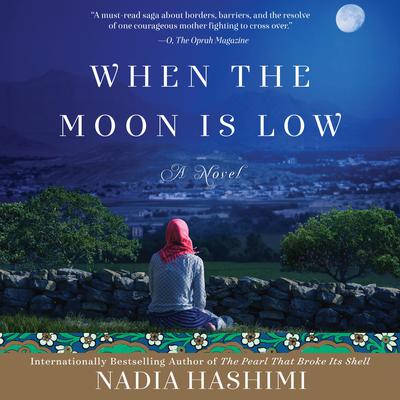 When the Moon Is Low: A Novel

By Nadia Hashimi
Read by Sneha Mathan  and Neil Shah

The unforgettable story of an Afghan family’s escape from the Taliban and perilous trek across Europe to seek asylum, led by one extraordinarily courageous woman. This is the second novel by Nadia Hashimi, the author of last year’s breakout, THE PEARL THAT BROKE ITS SHELL.

Mahmoud’s passion for his wife Fereiba, a schoolteacher, is greater than any love she’s ever known. But their happy, middle-class world—a life of education, work, and comfort—implodes when their country is engulfed in war, and the Taliban rises to power.

Mahmoud, a civil engineer, becomes a target of the new fundamentalist regime and is murdered. Forced to flee Kabul with her three children, Fereiba has one hope to survive: she must find a way to cross Europe and reach her sister’s family in England. With forged papers and help from kind strangers they meet along the way, Fereiba make a dangerous crossing into Iran under cover of darkness. Exhausted and brokenhearted but undefeated, Fereiba manages to smuggle them as far as Greece. But in a busy market square, their fate takes a frightening turn when her teenage son, Saleem, becomes separated from the rest of the family.

Faced with an impossible choice, Fereiba pushes on with her daughter and baby, while Saleem falls into the shadowy underground network of undocumented Afghans who haunt the streets of Europe’s capitals. Across the continent Fereiba and Saleem struggle to reunite, and ultimately find a place where they can begin to reconstruct their lives.

“A must-read saga about borders, barriers, and the resolve of one courageous mother fighting to cross over.”  —O, the Oprah Magazine
“Expertly depicting the anxiety and excitement that accompanies a new life, Hashimi’s gripping page-turner is perfect for book clubs.” —Library Journal (starred review)
“Narrators Sneha Mathan and Neil Shah work together to recount the harrowing events that take place as an Afghan family attempts to find a peaceful place to live…Mathan captures the constant worry and fears plaguing the distressed mother…Shah evokes the growing desperation of Saleem, Fereiba’s teenage son…This talented pair, Mathan and Shah, keep us on the edge of our seats to see if, against all odds, the family will be reunited. Winner of the AudioFile Earphones Award.” —AudioFile

Nadia Hashimi was born and raised in New York and New Jersey. Both her parents were born in Afghanistan and left in the early 1970s, before the Soviet invasion. In 2002, she made her first trip to Afghanistan with her parents. She is a pediatrician and the author of three books for adults, as well as the middle-grade novels One Half from the East and The Sky at Our Feet