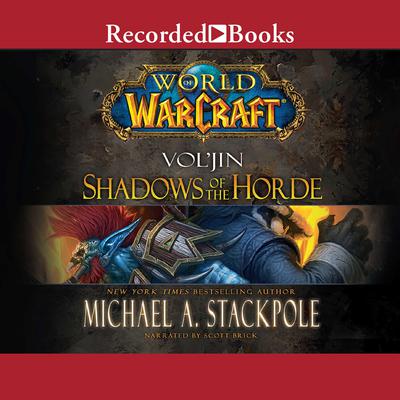 World of Warcraft: Vol'Jin: Shadows of the Horde

By Michael A. Stackpole
Read by Scott Brick

Michael A. Stackpole Recorded Books, Inc. by arrangement with Simon and Schuster Audio

A brand-new novel set in the universe of the record-breaking, internationally bestselling video game World of Warcraft! WAR IS COMING. Vol'jin, courageous leader of the Darkspear tribe. His strength and cunning are unmatched even among the Horde's most exalted champions. Now on the legendary continent of Pandaria, the troll chieftain faces his greatest trial yet, one that may redefine his purpose in the WORLD OF WARCRAFT Warchief Garrosh's assassins strike at Vol'jin, leaving him at death's door. But fate smiles on the wounded Darkspear leader when renowned brewmaster Chen Stormstout transports him to the safety of an isolated mountain monastery. There, Vol'jin wrestles with old hatreds smoldering between the Alliance and the Horde as he struggles to recover alongside a mysterious human soldier. Yet this is only the beginning of Vol'jin's worries. Soon, he becomes embroiled in an invasion of Pandaria launched by the Zandalari, revered trolls driven by dreams of conquest and power. This ancient tribe offers Vol'jin a chance to seize the glory that is the birthright of all trollsan offer made even more tempting after Garrosh's brazen treachery. Amid these troubling events, Vol'jin is rocked by intense visions depicting his race's grand history. As he questions where his loyalties lie, he knows he must make a choice about his own destiny that could save his people or damn them to languish under Garrosh's heel in the SHADOWS OF THE HORDE

Michael A. Stackpole is an award-winning novelist, game designer, computer game designer, graphic novelist, screenwriter, editor, and podcaster best known for his New York Times bestselling Star Wars novels I, Jedi and Rogue Squadron. He’s written more than forty-five novels, has books translated into ten different languages, and has an asteroid named after him. He lives in Scottsdale, Arizona. In his spare time, he dances, plays indoor soccer, and logs a lot of hours in World of Warcraft.