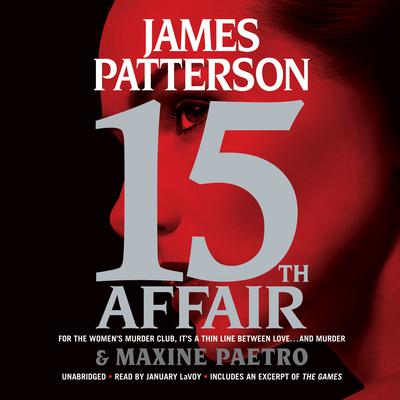 By James Patterson and Maxine Paetro
Read by January LaVoy

As she settles into motherhood and a happy marriage, Lindsay Boxer thinks she has found domestic bliss. But when a beautiful, alluring blonde woman with links to the CIA disappears from the scene of a brutal murder at a downtown luxury hotel, Lindsay’s life begins to unravel. Before she can track down the woman for questioning, a plane crash plunges San Francisco into chaos and Lindsay’s husband Joe vanishes. The deeper she digs, the more Lindsay suspects that Joe shares a secret past with the mystery blonde. Thrown into a tailspin and questioning everything she thought she knew, Lindsay turns to the Women’s Murder Club for help as she tries to uncover the truth. Filled with pulse-pounding international intrigue, 15th Affair proves that all is fair in love, war, and espionage.

“Those who haven’t read any of the novels in the Women’s Murder Club series are cheating themselves.” —Bookreporter, praise for the series

Maxine Paetro is the author of several novels and works of nonfiction and the coauthor of numerous books with James Patterson. She lives in New York with her husband.