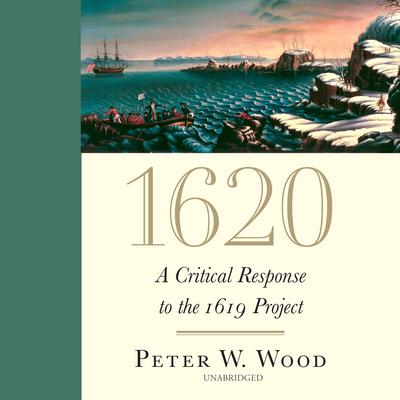 Peter Wood argues against the flawed interpretation of history found in the New York Times’ 1619 Project and asserts that the true origins of American self-government were enshrined in the Mayflower compact in 1620.

Was America founded on the auction block in Jamestown in 1619 or aboard the Mayflower in 1620? The controversy erupted in August 2019 when the New York Times announced its 1619 Project. The Times set to transform history by asserting that all the laws, material gains, and cultural achievements of Americans are rooted in the exploitation of African-Americans. Historians have pushed back, saying that the 1619 Project conjures a false narrative out of racial grievance.

This book sums up what the critics have said and argues that the traditional starting point for the American story—the signing of the Mayflower Compact aboard ship before the Pilgrims set foot in the Massachusetts wilderness—is right. A nation as complex as ours, of course, has many starting points, including the Declaration of Independence in 1776. But if we want to understand where the quintessential ideas of self-government and ordered liberty came from, the deliberate actions of the Mayflower immigrants in 1620 count much more than the near accidental arrival in Virginia fifteen months earlier of a Portuguese slave ship commandeered by English pirates.

Schools across the country have already adopted The Times’ radical revision of history as part of their curricula. The stakes are high. Should children be taught that our nation is, to its bone, a 400-year-old system of racist oppression? Or should we teach children that what has always made America exceptional is its pursuit of liberty and justice for all?

“Those of us who remain attached to the principles of the Founding need to read 1620: A Critical Response to the 1619 Project with both care and gratitude. For Peter Wood, like a highly trained commando, has advanced to the front lines to clear away the dangerous rubbish put forth by the 1619 Project. With critical skill and in clear prose, he has opened multiple avenues of assault on a misguided enterprise that in trying to rewrite history deserves to end up on its ash-heap.” —Robert Paquette, president, the Alexander Hamilton Institute, emeritus professor of history, Hamilton College
“With elegant precision Peter Wood dismantles the edifice ostentatiously called a ‘reframing’ of American history, the 1619 Project. He deftly exposes the jumble of lies, half-lies, logical fallacies, bad history, and bad faith of a project motivated by greed and hatred of America. For anyone who cares about history, education, truth, and the United States of America, 1620 is essential reading.” —Mary Grabar, resident fellow, Alexander Hamilton Institute for the Study of Western Civilization
“Via Peter Wood, the ‘civil body politic’ of the Mayflower Compact reasserts itself in the national conversation. 1620 is a dispassionate, clear reminder that the best in America’s past is still America’s best future.” —Amity Shlaes, chair, Calvin Coolidge Presidential Foundation
“Peter Wood’s pushback against the 1619 Project is at once sharp, illuminating, entertaining, and profound. More than a powerful exposé of the 1619 Project’s mendacity, Wood’s 1620 explains why so many Americans have succumbed to this exercise in manipulation—and shows the way to fight back.” —Stanley Kurtz, senior fellow, Ethics and Public Policy Center

Peter W. Wood is president of the National Association of Scholars. A former professor of anthropology and college provost, he is the author of several books about American culture, including Diversity: The Invention of a Concept (2003) and A Bee in the Mouth: Anger in America Now (2007). He is editor-in-chief of the journal Academic Questions and a widely published essayist. In 2019, he received the Jeane Kirkpatrick Prize for contributions to academic freedom.