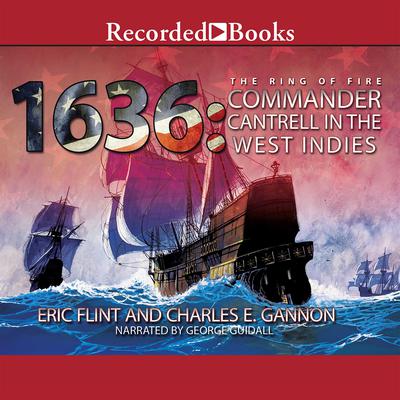 1636: Commander Cantrell in the West Indies

New York Times and Wall Street Journal best-selling alternate history series. Book #14 in the Ring of Fire series created by Eric Flint. Eddie Cantrell, now married to the king of Denmark's daughter, is sent by Admiral Simpson to the Caribbean to secure access to the most valuable commodity on that continent-not the gold and silver which the Spanish treasure, but the oil which up-time machines and industry need. The admiral has also provided Eddie's small task force with the new steam-powered frigates that have just come out of the navy's shipyards. Even with the frigates, a giant obstacle stands in his way: the Gulf-girdling Spanish presence in the New World. So a diversion is needed, carried out by an up-time car mechanic and a down-time mercenary colonel who also happens to be the last earl of Ireland. Their mission: grab the oil fields on Trinidad, and so distract the attention of Spain's New World governors. While the Spanish galleons and troops head for Trinidad, Commander Cantrell's smallest and fastest steam sloop will make a run to the Louisiana coast. There, her crew will wind their way up the bayous to the real New World prize: the Jennings Oil Field. But Cantrell's plans could be wrecked in a multitude of ways. He faces often-hostile natives, rambunctious Dutch ship captains, allied colonies on the brink of starvation, and vicious social infighting that can barely be contained by his capable and passionate new wife. When the galleons finally come out in force to engage his small flotilla, Eddie will discover that the Spanish aren't the only enemies who will be coming against him in a fateful Caribbean show-down.

Charles E. Gannon is a rising star in science fiction who has had short stories and novellas published in the anthologies Man-Kzin Wars XIII, Analog, and others. Gannon is coauthor with Steve White of Extremis, the latest entry in the legendary Starfire series created by David Weber. His most recent novel is 1635: The Papal Stakes, cowritten with Eric Flint. A Fulbright scholar, Gannon is Distinguished Professor of American Literature at St. Bonaventure University.