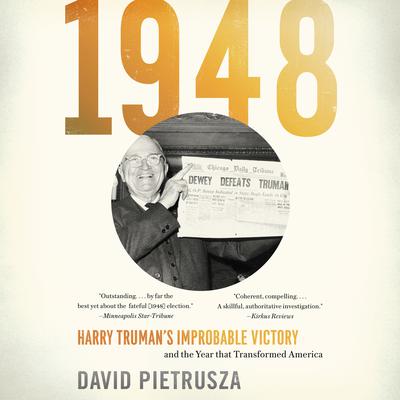 1948: Harry Truman's Improbable Victory and the Year That Transformed America

The wild, combative inside story of the most stunning upset in the history of presidential elections: Harry Truman's 1948 victory over Tom Dewey.

"Outstanding. . . . by far the best yet about the fateful [1948] election." ―Minneapolis Star-Tribune

Award-winning historian David Pietrusza unpacks the most ingloriously iconic headline in the history of presidential elections―DEWEY DEFEATS TRUMAN―to reveal the 1948 campaign's backstage events and recount the down-to-the-wire brawl fought against the background of an erupting Cold War, the Berlin Airlift, the birth of Israel, and a post-war America facing exploding storms over civil rights and domestic communism.

David Pietrusza has written or edited over three dozen books. An expert on the 1920s, he works as a public information officer. He lives in upstate New York.