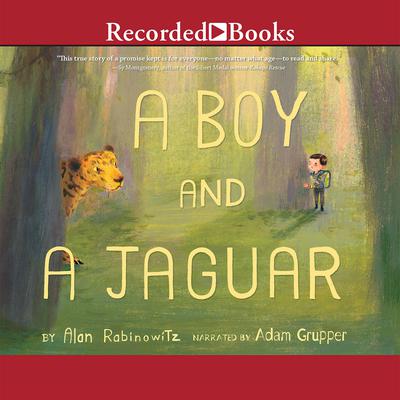 A Boy and a Jaguar

Alan loves animals, but the great cat house at the Bronx Zoo makes him sad. Why are they all alone in empty cages? Are they being punished? More than anything, he wants to be their champion--their voice--but he stutters uncontrollably. Except when he talks to animals... Then he is fluent. Follow the life of the man "Time Magazine" calls, "the Indiana Jones of wildlife conservation" as he searches for his voice and fulfills a promise to speak for animals, and people, who cannot speak for themselves. This real-life story with tender illustrations by Catia Chen explores truths not defined by the spoken word. Contributor Bio: Rabinowitz, Alan Dr. Alan Rabinowitz has dedicated his life to two causes: protecting the world's thirty-six wild cat species and advocating for stutterers as a spokesperson for the Stuttering Foundation of America. His conservation work has been chronicled in the New York Times, Scientific American, Audubon, Outside, Jerusalem Report and National Geographic Explorer, among others. He tells audiences that he feels lucky to have been given the gift of stuttering and believes that without it, he would not be on the path of his passion--saving big cats. This is his first book with Houghton Mifflin. Visit www.panthera.org and www.stutteringhelp.org. Contributor Bio: Chien, Catia Catia Chien is an avid painter who works from her studio in Southern California. She is a collection of fun entomology facts and has been known to prefer soup over most other types of food. Besides filled with vivid imagination, her work is described as rich with whimsy, colors, and energy. She is currently producing work for the children's book market, film and animation, comic book anthologies, and galleries.

“A beautiful book that will inspire stutterers to succeed and make a positive difference in the world.” —Temple Grandin, New York Times bestselling author
“This book made me cry tears of sympathy, and joy. You and I are this boy; you and I are this jaguar.” —Sherman Alexie, National Book Award winner
This true story of a promise kept is for everyone—no matter what age—to read and share. —Sy Montgomery, author of Kakapo Rescue: Saving the World’s Strangest Parrot

Alan Rabinowitz, PhD, is an American zoologist, conservationist, and field biologist and the CEO of Panthera, a nonprofit conservation organization devoted to protecting the world’s wild cat species. He is one of the world’s leading big cat experts and has authored over one hundred scientific articles and several books, including Jaguar: One Man’s Struggle to Establish the First Jaguar Preserve, Chasing the Dragon’s Tail: The Struggle to Save Thailand’s Wild Cats, and A Boy and a Jaguar.