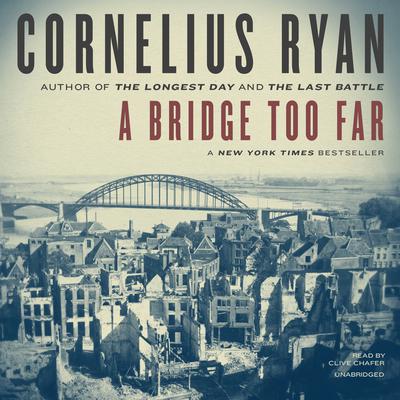 A Bridge Too Far

Winner of the 1974 Cornelius Ryan Award

A Bridge Too Far is Cornelius Ryan’s masterly chronicle of the Battle of Arnhem, which marshaled the greatest armada of troop-carrying aircraft ever assembled and cost the Allies nearly twice as many casualties as D-day.

In this compelling work of history, Ryan narrates the Allied effort to end the war in Europe in 1944 by dropping the combined airborne forces of the American and British armies behind German lines to capture the crucial bridge across the Rhine at Arnhem. Focusing on a vast cast of characters—from Dutch civilians to British and American strategists to common soldiers and commanders—Ryan brings to life one of the most daring and ill-fated operations of the war. A Bridge Too Far superbly recreates the terror, suspense, heroism, and tragedy of this epic operation, which ended in bitter defeat for the Allies.

“I know of no other work of literature of World War II as moving, as awesome, and as accurate in its portrayal of human courage.” —General James M. Gavin
“Originally published in 1974, this classic work of military history details the Battle of Arnhem in the Netherlands, a major Allied attack meant to end WWII in 1944. It’s a great book and deserves wide readership among the new generation. Narrator Clive Chafer has an elegant, silky smooth English accent that makes the book sound as if it’s straight out of the ‘World at War’ series from the BBC. Chafer does a creditable job reading the military details, and his crystal-clear diction makes the work understandable.” —AudioFile
“Ryan masters a spare, strong style to deliver a battle that has much of the majesty and beauty of classic tragedy.” —Kirkus Reviews (starred review)

Cornelius Ryan (1920–1974), born in Dublin, Ireland, became one of the preeminent war correspondents of his time, flying fourteen bombing missions with the US Eighth and Ninth Air Forces. He is the author of numerous books, including several classics of military history, which have appeared throughout the world in nineteen languages. He was awarded the Legion of Honor by the French government in 1973.