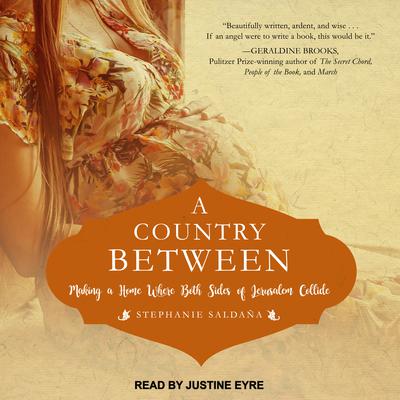 A Country Between: Making a Home Where Both Sides of Jerusalem Collide

When American writer Stephanie Saldaña finds herself in an empty house at the beginning of Nablus Road, the dividing line between East and West Jerusalem, she is a new wife trying to navigate a fragile terrain, both within her marriage and throughout the country in which she has chosen to live.

Pregnant with her first child, Stephanie struggles to protect her family, their faith, and herself from the cracks of Middle Eastern conflict that threaten to shatter the world around her. But as her due date approaches, she must reconcile herself with her choice to bring a child into a dangerous world. Determined to piece together life from the brokenness, she sets out to uncover small instances of beauty to balance the delicate coexistence between love, motherhood, and a country so often at war.

In an urban valley in Jerusalem, A Country Between captures the fragile ecosystem of the Middle East and the difficult first years of motherhood in the midst of a conflict-torn city. What unfolds is a celebration of faith, language, family, and love that fills the space between what was shattered, leaving us whole once more.

Saldana builds an impressive sense of genuine emotion, and she vividly explores the array of life in that seething section of Jerusalem . . . a serene memoir in which the author takes valuable time to regard the character of the Palestinian people and their way of life. —Kirkus Starred Review

Stephanie Saldaña received her BA from Middlebury College and her master’s degree from Harvard Divinity School. She was a Watson and a Fulbright scholar and has won several awards for her poetry. She lives in Jerusalem.