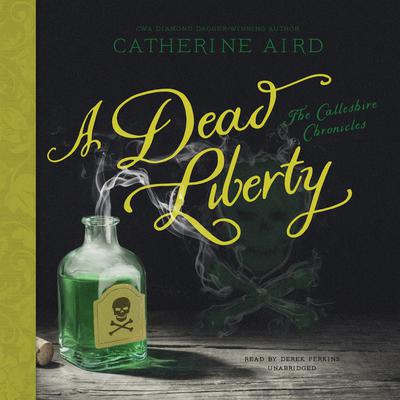 A crime of passion, a jealous admirer, a woman who would kill before she would be spurned—it might all fit if only the primary suspect would talk in CWA Diamond Dagger winner Catherine Aird’s A Dead Liberty.

Lucy Durmast waits patiently in front of the judge at her own murder trial, refusing to utter a single word. Kenneth Carline, an employee of her father’s, was found poisoned to death after eating a meal that Lucy herself had prepared.

Kenneth was set to marry another, and Lucy, it seems, was jealous. But what should have been an open-and-shut case of envy-driven murder becomes complicated when primary detective Trevor Porritt suffers permanent brain damage. C. D. Sloan inherits the file—and immediately begins poking holes in what looked like an airtight case. Why has the primary suspect gone mute? What was the victim doing with antinuclear pamphlets in his car? Was Detective Porritt’s run-in with the burglar an unhappy coincidence? And what part does the king of the African nation of Dlasa, a client of Lucy’s father, play in all this?

When someone connected to the case dies and the son of the king of Dlasa goes missing, panic begins to spread. Can Inspector Sloan and his hapless assistant, Constable Crosby, untangle this knotted web?

“Sloan involves himself in a case that is not only outside of his general jurisdiction, but also nearly a year old. Aird is in fine form in her twelfth novel, mixing the occasional red herring with the sporadic unexpected twist…Her characters are charming, intriguing, and just unique enough to be distinguishable without being bizarre.” —Publishers Weekly

Catherine Aird is the award–winning author of more than twenty crime fiction novels and several collections of short stories, most of which feature Detective Chief Inspector C. D. Sloan. She has been awarded the CWA Golden Handcuffs award for lifetime achievement and in 2015 the Diamond Dagger for an outstanding lifetime’s contribution to the genre. She holds an honorary MA degree from the University of Kent and was made an member of the Most Excellent Order of the British Empire.