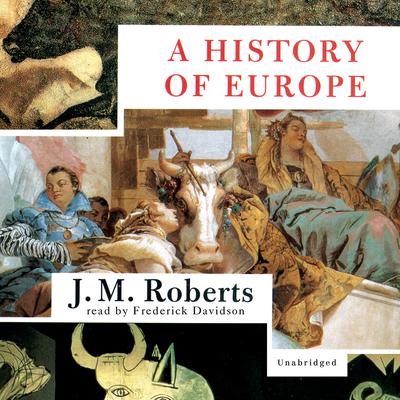 A History of Europe: Part Two

How is it that the small continent of Europe, with its rich multiplicity of cultures and traditions, has managed to exert so profound an influence on the rest of the world? Roberts’ sweeping and entertaining history notes the paradoxical effect, for good and ill, on everything touched by those Western values that originated in Europe.

Beginning with its Paleolithic origins and the early civilizations of the Aegean, Roberts traces the development of the European identity over the course of thousands of years, ranging across empires and religions, economics, science, and the arts. Antiquity, the age of Christendom, the Middle Ages, early modern history, and the old European order are all surveyed in turn, with particular emphasis given to the turbulent twentieth century.

“The appearance of A History of Europe by J.M. Roberts is…timely and welcome.” —New York Times Book Review
“Combines authority and good sense with fluency and wit. For the reader looking for an account which is concise but comprehensive, lively but reliable, this is the obvious choice.” —Times Literary Supplement (London)
“A lucid, convincing introductory guide, certainly the best such summation currently available.” —Kirkus Reviews