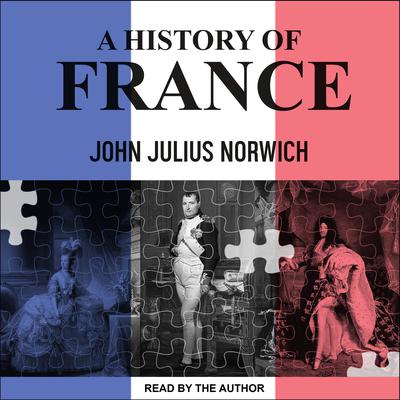 A History of France

John Julius Norwich—called a "true master of narrative history" by Simon Sebag Montefiore—returns with the book he has spent his distinguished career wanting to write, A History of France: a portrait of the past two centuries of the country he loves best.

Beginning with Julius Caesar's conquest of Gaul in the first century BC, this study of French history comprises a cast of legendary characters—Charlemagne, Louis XIV, Napoleon, Joan of Arc, and Marie Antionette, to name a few—as Norwich chronicles France's often violent, always fascinating history. From the French Revolution—after which neither France, nor the world, would be the same again—to the storming of the Bastille, from the Vichy regime and the Resistance to the end of the Second World War, A History of France is packed with heroes and villains, battles and rebellion, stories so enthralling that Norwich declared, "I can honestly say that I have never enjoyed writing a book more."

With his celebrated stylistic panache and expert command of detail, Norwich writes in an inviting, intimate tone, and with a palpable affection for France. One of our greatest contemporary historians has deftly crafted a comprehensive yet concise portrait of the country's historical sweep.

The major achievement of this book is the very fact that Norwich takes each of the four rulers to be a piece of the same story . . . written with often humming literary verve. —New York Times Book Review

John Julius Norwich is one of Britain’s preeminent historians and travel writers. He has written the histories of Norman Sicily, Byzantium, Venice, and the Mediterranean. Other books have been on Shakespeare’s history plays, on music, and on architecture.