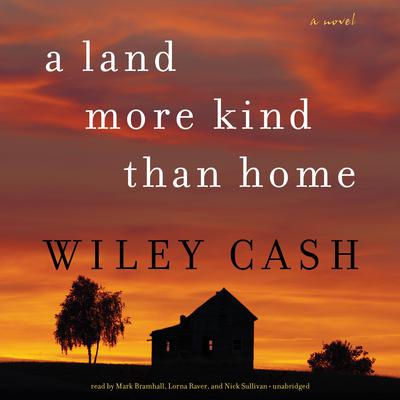 A Land More Kind Than Home

Huffington Post Pick of Books to Help You Understand America

One of the Kirkus Reviews’ Best Books of 2012

A Land More Kind Than Home is a literary thriller packed with stories and characters connected by faith, infidelity, addiction, and a sense of hope that is as tragic as it is unforgettable.

Deep in the heart of western North Carolina lies Marshall, a quiet mountain town where people believe in protecting their own—especially if they harbor secrets. For the town's modest folk, that's the way it's always been—a belief instilled in them for generations. For a curious boy like Jess Hall, it means trouble, especially when his older brother, Christopher, a mute autistic boy everyone calls Stump, can't help sneaking a look at something he isn't supposed to—an act that causes catastrophic repercussions and thrusts Jess into an adulthood for which he's unprepared.

Confronted with a stunned community, a family in pain, and witnesses who will not talk, Sheriff Clem Barefield turns to church matriarch Adelaide Lyle, whose role as the town's moral center makes her predictions of a violent reckoning to come all but unavoidable. As the lynchpin for this violence, Jess is set adrift in a world in which the truth is hidden from children, even if they know things adults do not.

“Three narrators deliver the story—one for each of the main characters whose points of view Cash explores. Particularly impressive is Nick Sullivan, who narrates from the point of view of Jess. Sullivan manages to project a youthful demeanor without falling into the trap of an overdone falsetto and succeeds in authentically depicting Jess’ fear and confusion. Lorna Raver and Mark Bramhall also fully inhabit Cash’s complicated, sympathetic characters, giving performances that are full of genuine emotion…An audiobook that delivers an unforgettable listening experience. Winner of the AudioFile Earphones Award.” —AudioFile
“Structured as a triptych, Cash’s debut about a town gripped by a menacing preacher has the timeless qualities of the Old Testament.” —Daily Beast
“Cinematic and symphonic, A Land More Kind Than Home’s compelling story is revealed in a sequence of voices that are as pitch-perfect as they are irresistible. This is a wonderfully impressive debut: tender, muscled, and unforgettable.” —Rikki Ducornet, author of Gazelle
“Wiley Cash is a talented and disciplined young writer, and his first novel, A Land More Kind Than Home, proves it. I think this could be the beginning of a long, fruitful career.” —Ernest J. Gaines, author of The Autobiography of Miss Jane Pittman
“Cash’s debut novel is mysterious, and indirectly creepy, which will have a powerful effect on readers…Riveting, disturbing, and lyrical, this novel is full of surprises the entire way through and will have readers glued to it from the start.” —RT Book Reviews, Top Pick
“A Land More Kind Than Home will grab you in its clutches like a boxed-up rattlesnake at a church healing…Don’t miss Wiley Cash’s homerun debut. I can already smell an Edgar award in his future.” —Madison County Herald
“This is a powerful novel, and one that readers truly won’t forget long after they have finished the last page” —Ventura County Star
“The distinctive and authentic voices of the characters help Cash draw a moving portrait of small-town life and the power of belief…Cash’s fine first effort pulls the reader into a shadowy, tormented world where wolves prowl in the guise of sheep.” —Publishers Weekly
“As lyrical, beautiful, and uncomplicated as the classic ballads of Appalachia, Cash’s first novel is a tragic story of misplaced faith and love gone wrong, set in the mountains of North Carolina…In a style reminiscent of Tom Franklin and John Hart, Cash captures the reader’s imagination in the first chapter, with the minister and his snakes, and maintains the wonder of the tale through to the coda of faith and affirmation. Lovers of Southern fiction should not miss this one.” —Library Journal (starred review)
“Cash is a graceful and promising writer, and his story and characters will linger in readers’ memories.” —Booklist
“What really sold me was the comparison to works by John Hart, Ron Rash, and Tom Franklin—an unbeatable trio of darkly thoughtful writers.” —Library Journal
“[A] mesmerizing first novel…Intensely felt and beautifully told.” —New York Times Book Review
“Cash, himself from western North Carolina, never stoops to typecasting his characters, instead exploring how their pasts have led them to the present. The result is a compelling, fast-paced story that draws the reader into the lives of Marshall’s residents.” —BookPage
“As lean and spare as a mountain ballad, Cash’s novel resonates perfectly…An evocative work about love, fate, and redemption.” —Kirkus Reviews
“Whew! Wiley Cash is the real deal. His first novel, A Land More Kind Than Home, is dense with stories intersecting like the branches in a laurel hell.” —Nancy Peacock, author of Life without Water
“I try to state the truth and dislike flinging superlatives about with mad abandon, but I have been so deeply impressed by A Land More Kind Than Home that only superlatives can convey the tenor of my thought: it is one of the most powerful novels I have ever read.” —Fred Chappell, author of I Am One of You Forever
“A first novel that sings with talent. A Land More Kind Than Home will knock your socks off.” —Clyde Edgerton, author of The Bible Salesman
“A Land More Kind Than Home is a riveting story! The writing is bold, daring, graceful, and engrossing.” —Bobbie Ann Mason, author of Shiloh and Other Stories
“Cash adeptly captures the rhythms of Appalachian speech…Has elements of a thriller, but Cash is ultimately interested in how unscrupulous individuals can bend decent people to their own dark ends.” —Washington Post
“Absorbing…Cash uses well-placed flashbacks…to flesh out his characters.” —Entertainment Weekly (A-)
“Wiley Cash delivers a lyrical, poignant debut that melds crime fiction with Southern Gothic for an emotional story about two brothers…A Land More Kind Than Home heralds a new talent at the beginning of what should be a promising career.” —Miami Herald
“A powerfully moving debut that reads a little as if Cormac McCarthy decided to rewrite Harper Lee’s To Kill a Mockingbird.” —Richmond Times-Dispatch
“Cash writes with confidence and compassion…A beautifully written morality tale.” —Milwaukee Journal-Sentinel
“A smashingly triumphant debut, one which will stay with you long after you’ve finished.” —St. Augustine Record
“Clear-sighted, graceful debut…[Cash] adds his promising new voice to Southern fiction.” —Atlanta Journal-Constitution

Wiley Cash is the award-winning and New York Times bestselling author of A Land More Kind Than Home and the acclaimed This Dark Road to Mercy. He won the SIBA Book Award, was a finalist for the PEN/Robert W. Bingham Prize, and has been nominated for many more awards. A native of North Carolina, he has held residency positions at Yaddo and the MacDowell Colony, and is the writer-in-residence at the University of North Carolina, Asheville.