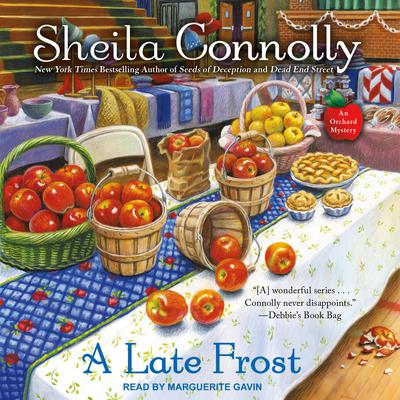 The usually quiet town of Granford, Massachusetts, is even drowsier during the colder months. But this year it's in for a jolt when Monica Whitman moves into town. She's a dynamo who wants to make friends fast in her new home, and she throws herself into community activities. Meg Corey, now Chapin after her marriage to Seth Chapin, is intrigued by the new arrival, who has already sold the town board on a new, fun way to bring in visitors during the off-season: WinterFare, which will feature local foods (such as Meg's apples) and crafts, as well as entertainment.

Tragically, Monica falls ill and dies after the event in what looks like a case of food poisoning. When all the food served at WinterFare has been tested, including Meg's apples, it becomes clear that there's a more sinister explanation to the older woman's sudden demise.

Meg's investigation uncovers a bushel of potential suspects, one of whom is rotten to the core.

Sheila Connolly is a New York Times bestselling author and the Anthony and Agatha Award–nominated author of over thirty titles, including the Museum Mysteries, the Orchard Mysteries, and the County Cork Mysteries as well as a number of short stories in various anthologies. She lives in Massachusetts with her husband and three cats, and visits Ireland as often as she can.