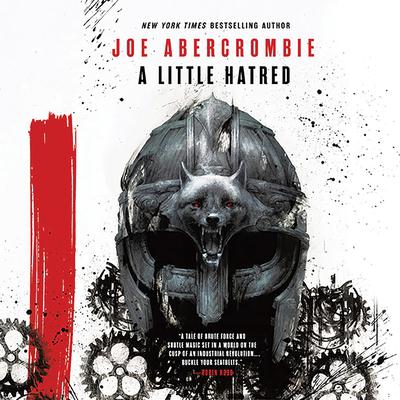 The Age of Madness Series: Book 1

An i09 Pick of SSF Books for Fall

A Kirkus Reviews Pick of the Best Science Fiction, Fantasy, and Horror Books of the Month

From New York Times bestselling author Joe Abercrombie comes the first book in a new blockbuster fantasy trilogy in which the age of the machine dawns but the age of magic refuses to die.

The chimneys of industry rise over Adua and the world seethes with new opportunities. But old scores run deep as ever.

On the blood-soaked borders of Angland, Leo dan Brock struggles to win fame on the battlefield, and defeat the marauding armies of Stour Nightfall. He hopes for help from the crown. But King Jezal’s son, the feckless Prince Orso, is a man who specializes in disappointments.Savine dan Glokta—socialite, investor, and daughter of the most feared man in the Union—plans to claw her way to the top of the slag-heap of society by any means necessary. But the slums boil over with a rage that all the money in the world cannot control.The age of the machine dawns, but the age of magic refuses to die. With the help of the mad hillwoman Isern-i-Phail, Rikke struggles to control the blessing, or the curse, of the Long Eye. Glimpsing the future is one thing, but with the guiding hand of the First of the Magi still pulling the strings, changing it will be quite another…

“No one writes with the seismic scope or primal intensity of Joe Abercrombie.” —Pierce Brown, #1 New York Times bestselling author
“Abercrombie’s work is dark and gritty and filled with black humor and grim observations about human nature.” —Forbes
“Digs into the moments where lives are changed, often for the worse, and then sets his characters on paths that are only going to get tougher before they get better…Military grim-dark fantasy at its finest. —Amazon.com
“Abercrombie expands the First Law fantasy universe with a new epic saga of war and power set in a world where the industrial age is rising…With expert craft, Abercrombie lays the groundwork for another thrilling trilogy.” —Publishers Weekly (starred review)
“In this brutal fantasy…Abercrombie unerringly juggles a large cast of multifaceted, morally ambiguous characters…This unflinching depiction of human nature becomes slow-motion tragedy on a grand scale, shot through with moments of humor, excitement, and hope.” —Booklist (starred review)
“Abercrombie, a longtime favorite of fantasy readers known for page-turning and immersive reads, begins a brand-new dark fantasy series with A Little Hatred…This is the start of something awesome.” —Kirkus Reviews

Joe Abercrombie is the author of Red Country and the First Law trilogy: The Blade Itself, Before They Are Hanged, and Last Argument of Kings. He is a full-time writer and freelance film editor.