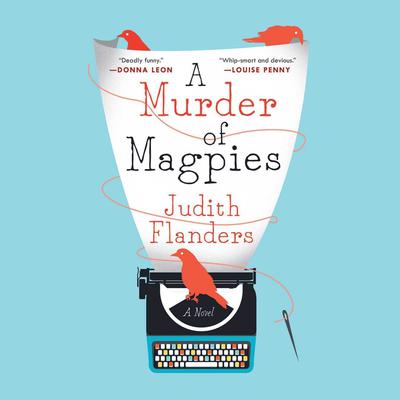 A Murder of Magpies

It's just another day at the office for book editor Samantha Clair. Checking jacket copy for howlers, wondering how to break it to her star novelist that her latest effort is utterly unpublishable, lunch scheduled with gossipy author Kit Lowell, whose new book will deliciously dish the dirt on the fashion industry. But little does she know how much trouble Kit's book is about to cause. Before it even goes to print. When police inspector Field turns up at the venerable offices of Timmins & Ross, asking questions about the undelivered package that was addressed to Sam, she knows something is wrong. The messenger sent to deliver the package was murdered, and then Kit goes missing. Suddenly, Sam's nine-to-five life is turned upside down and she is propelled into a criminal investigation. Someone doesn't want Kit's scandalous manuscript published and unless Sam can put the pieces together in time, they'll do anything to stop it.

“Hilarious, big-hearted, clever, whip-smart, and devious. A truly wonderful crime novel by a brilliant writer…Judith Flanders has found that difficult, magical ground between humor and crime, where the death is never trivialized but the territory is hysterically pilloried. Brava!” —Louise Penny, #1 New York Times bestselling author of The Long Way Home
“Deadly funny. Judith Flanders’ wry take on publishing and murder should be on everybody’s wish list.” —Donna Leon, New York Times bestselling author of By Its Cover
“Wickedly funny…the perfect storm of an entertaining read.” —Times (London)
“From the first page you want Samantha Clair to be your new best friend…[Flanders] keeps the reader intrigued and laughing in equal measure.” —Daily Mail (London)
“Wickedly clever and very funny…But like Bridget Jones, the obvious forerunner to her singleton London book editor/detective, Samantha Clair is not just played for laughs. There’s some deep social satire in her investigation into the disappearance of a gossip columnist. And, yes, lots of laughs.” —Cleveland Plain Dealer
“Carefully mixed up and served, with a lot of humor…Here’s hoping Flanders has more to say and will be back with another book.” —San Jose Mercury News
“The array of delightful and believable characters, as well as a neat turn at the end, will leave readers well satisfied and anticipating the next installment.” —Publishers Weekly
“Susan Duerden gives voice to Flanders’ first-person protagonist, publishing editor Samantha Clair. With consistency and emotion she creates a high level of authenticity in the reactions of a woman unaccustomed to big-money book sales, let alone murder and mayhem. Duerden maintains a swift pace without hurrying, and her accents are distinct as Sam travels by foot, rail, and air throughout Europe, searching for clues…Duerden’s light tone works well for a book that is edgier than a traditional cozy, and she delivers the occasional profanity with spunk.” —AudioFile
“A sophisticated and smart mystery…Sam is an unassuming protagonist surrounded by strong and colorful secondary characters, but her low profile and keen intelligence make her an effective sleuth who can inconspicuously piece together the clues…The clever protagonist and entertaining workplace drama will entice readers to come back again for the next installment.” —RT Book Reviews (4 stars)

Judith Flanders is the international bestselling author of The Invention of Murder and one of the foremost social historians of the Victorian era. She is a contributor to the London publications Daily Telegraph, Guardian, Spectator, and the Times Literary Supplement. Before turning her hand to writing, she worked as an editor for various publishing houses, including the publications department of the National Portrait Gallery, London.