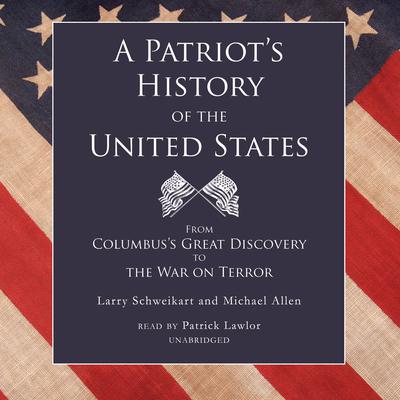 A Patriot’s History of the United States: From Columbus’s Great Discovery to the War on Terror

By Larry Schweikart and Michael Allen
Read by Patrick Lawlor

Since the liberal revolution of the ’60s and ’70s, American history books have been biased toward the negative, distorting the way America’s past is taught. They overemphasize America’s racism, sexism, and bigotry while downplaying the greatness of her patriots. As a result, more emphasis is placed on Harriet Tubman than on George Washington, more on the internment of Japanese Americans during WWII than D-day or Iwo Jima, more on the dangers we faced from Joseph McCarthy than those we faced from Josef Stalin.

This book offers a long-overdue acknowledgment of America’s true and proud history. The authors reexamine America’s discovery, founding, and development with an appreciation for the principles of public virtue, personal liberty, and private property that have made this nation so uniquely successful.

“This book has taught me more about our history than any I’ve read in years. A Patriot’s History of the United States should be required reading for all Americans.” —Glenn Beck
“Larry Schweikart and Michael Allen remind us what a few good individuals can do in just a few short centuries…A fluid account of America from the discovery of the continent up to the present day.” —Wall Street Journal
“A welcome, refreshing, and solid contribution to relearning what we have forgotten and remembering why this nation is good, and worth defending.” —National Review
“There are a thousand pleasant surprises and heartening reminders that underneath it allAmericaremains a country of ideas, ideals, and optimism—and no amount of revisionism can take that legacy away.” —Humane Studies Review

Larry Schweikart, a native Arizonian, has taught at the University of Dayton since 1985. His bestselling books include Seven Events that Made America America and his #1 New York Times bestseller, with Mike Allen, A Patriot’s History of the United States. He has been on almost all media, from Al-Jazeera to Glenn Beck, from Tavis Smiley to Rush Limbaugh. He retired in 2016 to move back to Arizona.

Michael Allen is a prizewinning author and a professor of history and American studies at the University of Washington, Tacoma.